Flannery O’Connor’s conviction that “the writer should never be ashamed of staring; there is nothing that does not require his attention,” applies equally well to botanists.

Ferdinand Lindheimer — a German immigrant who arrived in Texas in 1836, equipped with amazing energy and obsessive curiosity — clearly had mastered the art of staring. Laura Deming, a great-great-great-granddaughter, recounts a family legend about the father of Texas botany:

“Once, when He came upon a chief and a war party, he had a staring competition with the chief. Because he won, they allowed him to live.”

Whatever the truth of the story, when it came to the flora of Texas, Lindheimer’s propensity to stare served him well. In 1839-1840, he visited George Engelmann, a friend from Frankfurt who’d settled in St. Louis. After seeing the samples of Texas plants Lindheimer brought with him, Engelmann mentioned his work to Asa Gray, founder of the Gray Herbarium at Harvard University and author of Gray’s Manual of the Botany of the Northern United States. Gray was impressed, and interested.

Over the next years, Lindheimer provided Engleman and Gray with thousands of specimens, and left us a correspondence rich in references to discoveries made as he roamed Texas. Today, nothing delights me quite so much as finding one of the plants that bears his name, like this pretty Gaura (Oenothera lindheimeri), and then finding it mentioned in Lindheimer’s own letters to Englemann.

“What I may find in the Guadalupe Bottom, where we shall be in the course of a week, I wonder… If the Gaura Lindheim grows in the west, you shall have seeds. I did not find it last year between the Brazos and the Colorado. It grew commonly four miles east of Houston.” (written from a camp on the Agua Dulce, 22 January 1845) 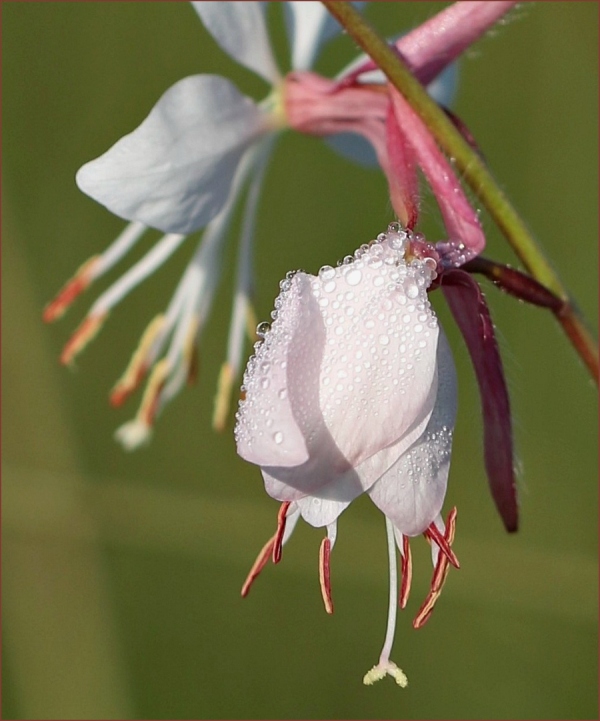 “Gaura Lindheimeri seems to appear no farther west than the Brazos, and scarcely west of the San Jacinto-Buffalo Bayou region; otherwise, [Thomas] Drummond surely would have found it.” (from New Braunfels, 5 February 1846)

35 thoughts on “What Lindheimer Saw – Gaura”