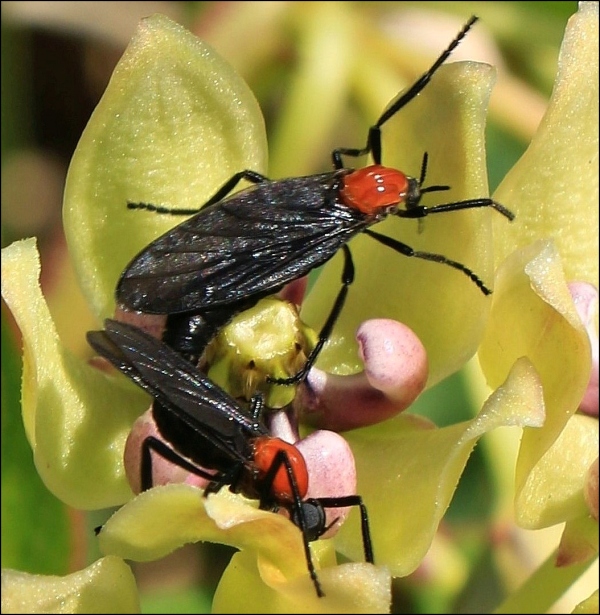 A species of fly rather than a true bug, lovebugs are named for their curious habit of not separating after mating. Facing in opposite directions like the couple above, they fly and crawl hither and yon until the male (smaller, with large, round eyes) takes his leave and goes off to die, while the larger female finds some nice, decaying vegetation and lays her eggs.

Anyone who takes to the highways of the southeastern United States when lovebugs are swarming knows how curse-worthy they can become. Presumably attracted to the roads because of heated pavement and exhaust fumes from vehicles, they clog radiators, make it impossible to see through windshields, and do real damage to automotive paint if not promptly removed.

Hundreds of articles provide advice on dealing with the annoying insects, as well as a caution for anyone planning to paint during their twice-yearly swarms. In a word: don’t. For reasons not fully understood, lovebugs are attracted to freshly painted surfaces, especially light-colored ones.

What’s less well known is that lovebugs adore fresh varnish. I’ve yet to find an article that mentions their secret love directly, but every boat varnisher on the Gulf Coast dreads the arrival of lovebug season. The frustration of watching them settle onto a previously perfect, smooth, glossy surface can be substantial.

Even newly-opened cans of varnish draw them like an open bar at a convention. Within seconds of removing the lid, the insects appear. More often than not, they’ll fly directly into the can, where they promptly die.

Coping with their arrival always is a challenge. One trick is to varnish early or late, since lovebugs prefer to be out and about from mid-morning until later afternoon.

Still, it’s inevitable that a few will land. When they do, this simple technique sometimes makes sanding and revarnishing unnecessary.

After allowing the varnish to harden overnight, break the lovebug’s little legs, and toss away the carcass. A few days later, after the varnish has hardened a bit more, remove the leg remnants with polishing compound.

You heard it here first.