The barrier islands of the Texas coast are well enough known for the beachcombing, fishing, and partying they offer. But behind the dunes, a world of flowering plants and grasses holds sway, including several species of cacti.

On my neighborhood islands — Galveston, Follett’s, and Brazos — at least three species of prickly pear can be found in addition to Opuntia engelmannii: O. humifusa (previously O. compressa), O. macrorhiza, and O. stricta, which is nearly spineless. Still, my favorite is the common Texas prickly pear.

Flowers range from a bright, clear yellow to orange, or even red. Sometimes, flowers of all three colors appear on the same plant. Many flowers combine colors and, as they age, even the brightest yellow fades toward the same delicate, peachy hue that characterizes the buds.

The petals of aging flowers sometimes seem to thin; in the right light, they can glow like paper lanterns.

A flower still blooms along the Blue Water highway at sunset

Regardless of color, prickly pear flowers contain an abundance of pollen. Bees, flies, beetles, and ants are common pollinators, with larger bees taking advantage of the easy access to pollen provided by the flowers. 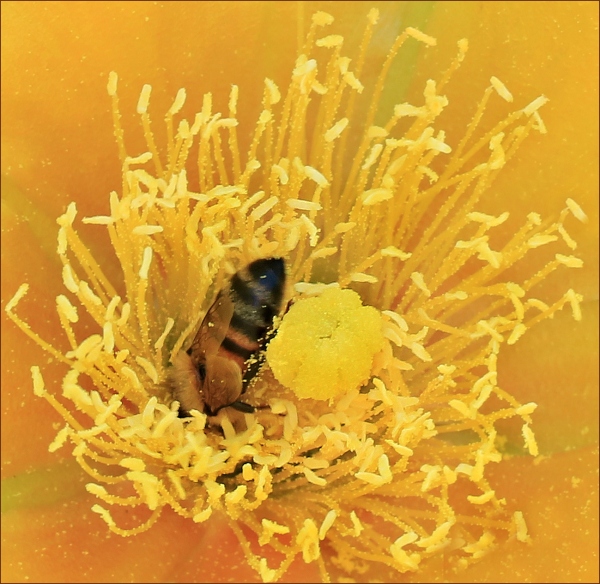 Here, a bee pauses before taking the plunge, perhaps to appreciate the riches spread before it. When it comes to the prickly pear — the state plant of Texas — the bee and I are equally appreciative. 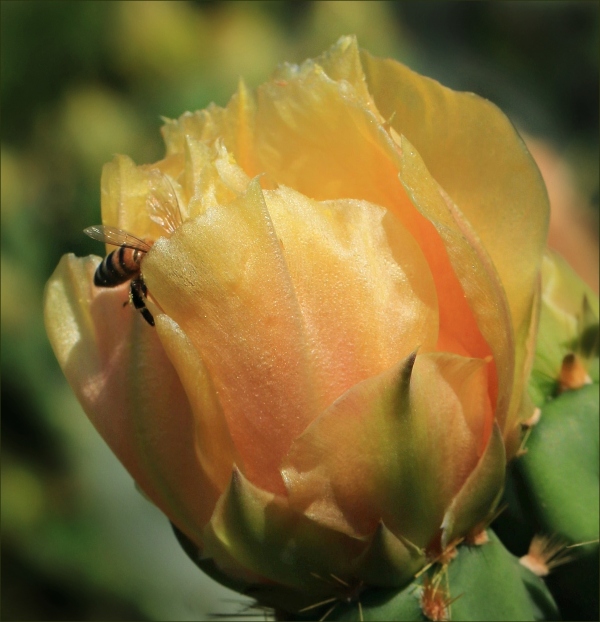 Comments always are welcome.
A note regarding taxonomy:  Some sites consider O. engelmannii and O. lindheimeri to be separate species. Others continue to list the Texas prickly pear as O. engelmannii var. lindheimeri. For  a comparison of the species, click here. (The site as a whole is an excellent resource.)

51 thoughts on “A Passion For Opuntia”