For some, changing colors on trees or shrubs provide a first hint of the coming fall. Here on the upper Texas coast, autumn arrives differently, flying in on the wings of migrating birds.

Teal arrive first, followed closely by peripatetic mallards. Last week, the calls of returning osprey began echoing across Galveston Bay. Yesterday I realized the swallows had flown away, but their space soon will be filled by an assortment of geese, raptors, and cranes.

While snowy egrets stay with us throughout the year, their numbers increase in the fall as birds return to their favored coastal marshes, inland mudflats, agricultural land, and drainage ditches.

Like the proverbial birds of a feather, they roost and nest together; last weekend I found a large flock hidden away along a canal in the Brazoria Wildlife Refuge. 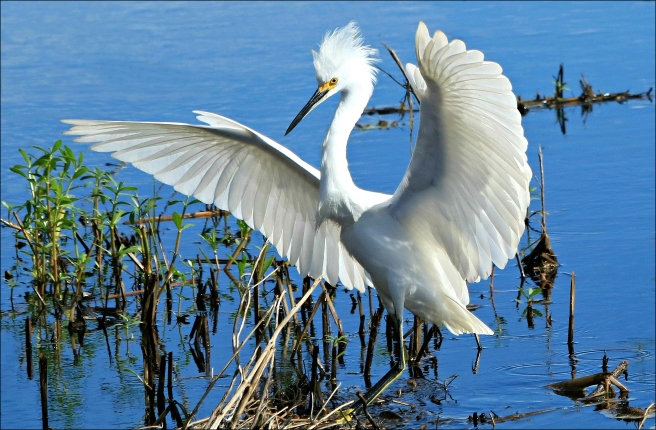 Sometimes referred to as ‘Golden Slippers’ because of their yellow feet, egrets also have yellow lores (the area between their bill and their eyes), which change to a deeper salmon or pinkish-orange during the breeding season.

In the late 1800’s and early 1900’s, their plumes sold for nearly twice the cost of gold, and were used to decorate women’s hats. Inevitably, they were hunted nearly to extinction, but after the passage of laws meant to protect them, their numbers increased. Today, they’re a common sight: their golden slippers worth as much as any gold, and their developing plumes a hint of courtships to come.

Comments always are welcome. Click any image for a larger, more detailed view.