Because of its resemblance to a Turkish turban, this member of the mallow family usually is called Turk’s cap; some call it Drummond’s wax mallow,  red mallow, Texas mallow, Mexican apple (it has an edible fruit), or sleeping hibiscus — a name no doubt occasioned by petals that normally remain closed, rather than fully opening.

When it comes to climate and soils, it’s a very tough, versatile plant. It’s a native plant, and a magnet for butterflies and hummingbirds. It’s extremely drought-tolerant and will thrive in dry soils. It does very well in the shade but will take quite a bit of sun, so it’s a very versatile plant; something that is pretty well adapted all over the entire state.

It’s an old garden plant — something that’s found in old-home sites and in old gardens.

Of course, to paraphrase that famous line from The Wind in the Willows, there’s nothing half so much worth doing as simply messing about with plants. After some horticulturalists messed around with the Turk’s cap, a new variety was created.

Greg Grant, formerly with AgriLife Research and now with Stephen F. Austin Gardens in Nacogdoches, Texas, was urged to develop the pink variety by Pam Puryear, one of the first women to graduate from Texas A&M University.

Both Grant and Puryear were members of Texas Rose Rustlers, an organization dedicated to antique roses and gardening in general, when Puryear asked Grant to develop some new varieties of Turk’s cap.

After first achieving a large hybrid plant he named ‘Big Mama’ because its flowers doubled the size of those on the native Turk’s cap, Grant crossed ‘Big Mama’ with a cold-hardy plant with white flowers, and among the variations that emerged was the peachy-pink version of our more common red flower.

Today, the pink version surrounds the Raiford Stripling-designed house that anchors the Lady Bird Johnson demonstration garden at the Pineywoods Native Plant Center in Nacogdoches. Associated with Stephen F. Austin State University and located near the campus, the Center was dedicated on April 8, 2000, becoming the third affiliated garden of Austin’s Lady Bird Johnson Wildflower Research Center. Both Lady Bird and Dr. Robert Breunig, director of the Center at the time, attended the event.

Of course, nature enjoys messing about with flowers, too. Outside Nacogdoches, at the edge of thickly-forested land along Bonaldo Creek, I found a treat for my white-flower-loving heart. 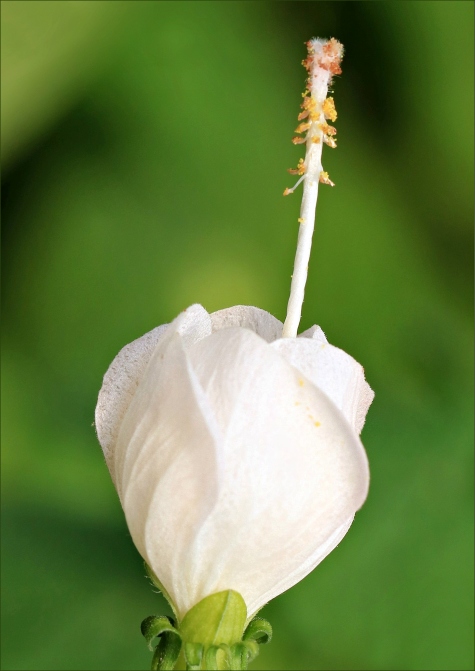 My name for it would be M. arboreus var. drummondii ‘Lagniappe’

A number of white varieties have been bred, but this was no nursery plant. It was nature at her finest, producing her own variation on the beloved traditional flower we know as Turk’s cap.

47 thoughts on “Theme and Variations”