While such people may exist, I’ve yet to meet anyone who actively dislikes sunflowers. The willingness of common sunflowers (Helianthus annuus) to put down roots almost anywhere — construction sites, vacant lots, rural fencelines — can bring a smile to the face of even the most determined curmudgeon.

But there are many versions of the sunflower, including three of my favorites: swamp sunflower (H. augustifolius), silver-leaf sunflower (H. argophyllus), and Maximilian, named for Prince Maximilian Alexander Philipp of Wied-Neuwied, a German explorer and naturalist who traveled through the United States in 1832–34.

Swamp and silver-leaf sunflowers prefer conditions farther south; Maximilians appear in my area, but erratically, and sometimes in the most unexpected places. When I noticed a patch of them decorating a narrow strip of land in Brazoria County, I stopped for a visit. Despite being well past the peak of their flowering, they were a delightful discovery. 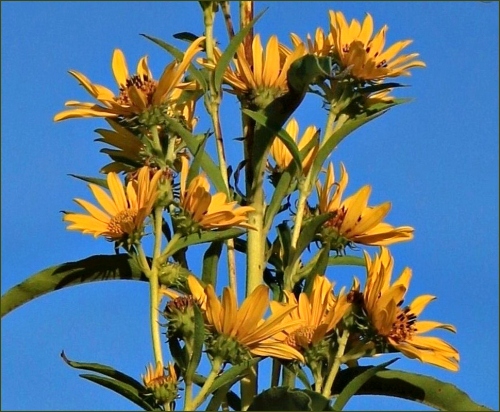 Clustered blooms and height help to make them noticeable. Commonly four to six feet tall, and even taller where conditions are right, Maximilians are tough and adaptable. Their flowers appear late in the season, often blooming in tandem with goldenrod.

Gravity often pulls tall, flower-laden stalks down to the ground, but shorter stalks will lean as well, even in the absence of wind.

Every sort of pollinator is attracted to them, especially butterflies. Here, a Gulf fritillary (Agraulis vanillae) pauses for a sip of nectar. 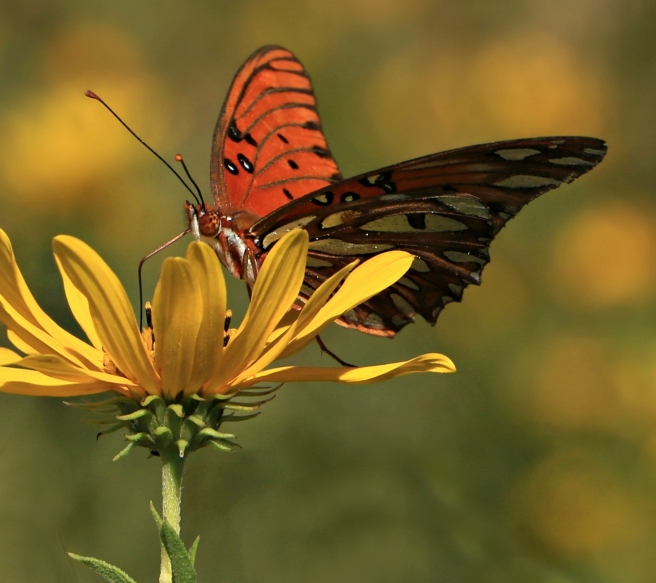 A special treat was finding a new example of a favorite autumn color combination in the field. Here, purple bindweed (Ipomoea cordatotriloba) clambers up a Maximilian stem, showing off its leaves in the process.

Since I discovered this colony, winds associated with cold and warm fronts have been strong. Whether the sunflowers will be going strong when I next pass by is hard to say, but I suspect that they won’t be gone.