Carolina wolfberry (Lycium carolinianum), a low-growing plant with somewhat succulent leaves, grows from North Carolina south through Florida, then west into California and Mexico. Along the Texas coast, it thrives beautifully, thanks to a tolerance for salt, drought, and standing water.

Although a member of the Solanaceae (nightshade) family, wolfberry has a four-lobed corolla rather than the five lobes common to most Solanaceae. Some sources say it blooms in April and May; other extend the bloom period from May until October. However, these photos were taken in late November, after some near-freezing temperatures, and even now, moving well into December, wolfberry is blooming and forming new fruits.

A ripening wolfberry, dusted with sand

Typically, the greatest number of fruits are available in October and November: the precise time that migrating whooping cranes begin to arrive on the Texas coast. The bulk of the cranes’ winter diet is comprised of blue crabs, but wolfberries can provide as much as one-quarter to one-half of the crane’s energy needs in early winter.

Often called Christmas berry because of its color, wolfberry also is known as whooping crane candy. Like kids at a Christmas candy bowl, the whoopers can’t seem to get enough of the treat: lucky for them it’s as nourishing as it is tasty.

Humans, too, have made use of the fruit, which is said to have a tomato-like flavor; Native Americans consumed it either raw or dried. 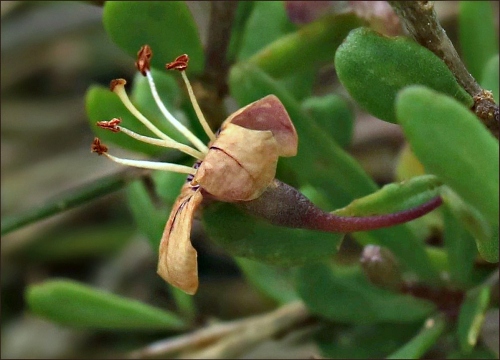 As the plants’ flowers begin to fade prior to the berries’ appearance, they change color, turning a light, pinkish-salmon before their petals become increasingly translucent. 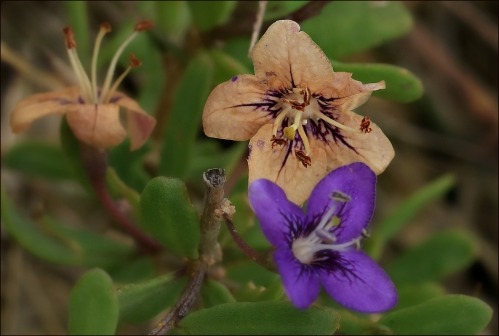 Shading from lavender to a rich, deep purple, their flowers often can be found among stands of silverleaf nightshade: another member of the Solanaceae whose purple blooms linger well into fall.

While flowering, the plants provide pollen and nectar to a variety of bees, flies, and butterflies. At a time of year when winter is beginning to bring a certain dreariness to the landscape, the flowers and fruits of the wolfberry are a welcome and dependable source of color and food.