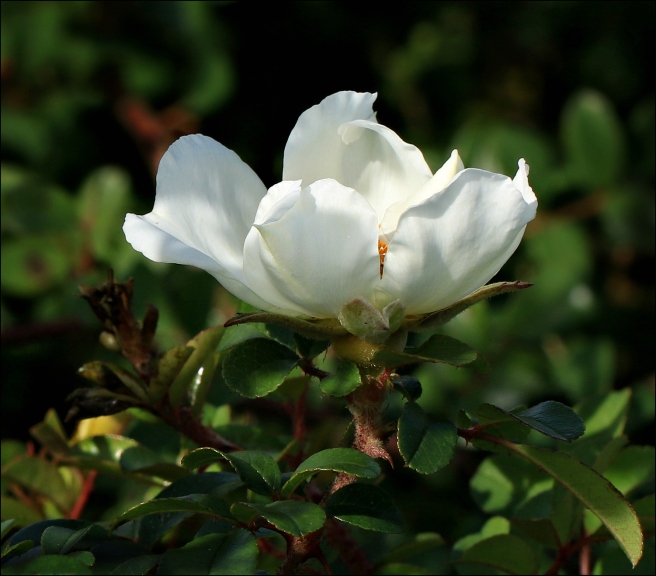 Lovely though it may be, Macartney rose rivals the Chinese tallow tree as a scourge upon the land. Another native of China, introduced into the United States as a landscape plant or means of natural fencing, it arrived in southeast Texas in the past century. Thanks to the wide dispersal of seeds by birds and cattle, it’s now spread to pastures and rangeland, and can be found in every nature center or wildlife refuge I visit.

Although not considered a noxious plant, it’s considered invasive for good reason. According to the TexasInvasives database:

Still, its flower is undeniably lovely, blooming late into the year — even into December — near the coast. It requires nothing more than a change from ‘summer’ to ‘autumn’ (or even ‘winter’) for the words of Thomas Moore’s 1805 poem to capture the poignancy of its increasingly sparse flowers as true winter approaches.

‘Tis the last rose of summer
Left blooming alone;
All her lovely companions
Are faded and gone;
No flower of her kindred,
No rosebud is nigh,
To reflect back her blushes,
To give sigh for sigh.

I’ll not leave thee, thou lone one!
To pine on the stem;
Since the lovely are sleeping,
Go, sleep thou with them.
Thus kindly I scatter
Thy leaves o’er the bed,
Where thy mates of the garden
Lie scentless and dead.

So soon may I follow
When friendships decay,
And from Love’s shining circle
The gems drop away.
When true hearts lie withered
And fond ones are flown,
Oh! who would inhabit
This bleak world alone.

41 thoughts on “The Last Rose of Autumn”