As if to emphasize the appropriateness of the sign’s message, this American alligator (Alligator mississippiensis) had decided to take its ease on a nearby bank at the Brazoria Wildlife Refuge.

From a slightly different perspective, its size was impressive, and its awareness of its human visitor detectable in a just-barely-slitted eye. (If you enlarge the photo, the slit in its eye will become detectable.)

As I moved around for a slightly better view of the impassive reptile, its eye finally opened, and it seemed to be running through a mental checklist. Even though it didn’t stir, I decided I would, and I made for the boardwalk. 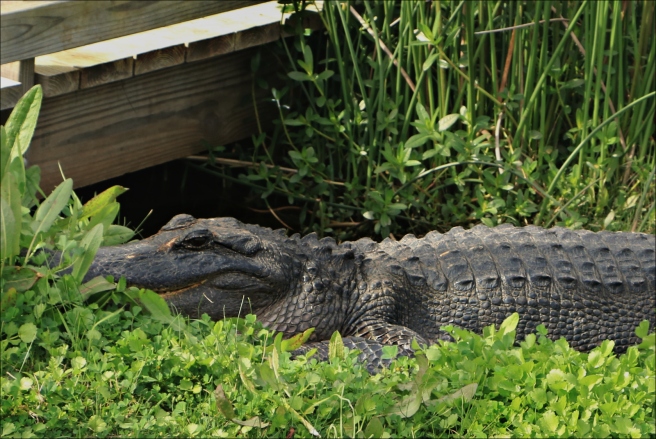 From my new vantage point, I discovered that the alligator wasn’t alone. Obviously a female, she was surrounded by youngsters whose size suggested they still were less than a year old.  Able to explore the world independently, they remained young enough to crave their mother’s considerable protection; a dozen or so were staying close by her side.

After watching my movements for a few minutes, one youngster decided to snuggle up even more closely to its mother’s foot: for all the world like a human child running back to its parent for security.

Its braver siblings seemed eager to move around at the pond’s edge, perhaps hunting for insects, tadpoles, frogs, or small fish for their afternoon snack.

Despite their size and reputation for ferocity, mama alligators are diligent and loving parents. For at least the first year of her babies’ lives, she protects them as fiercely as she protected her nest, and juvenile alligators will call to her for protection when they feel threatened.

About six to eight inches long as hatchlings, the young often ride on their mother’s back as she swims, or sun themselves there when she’s at rest. 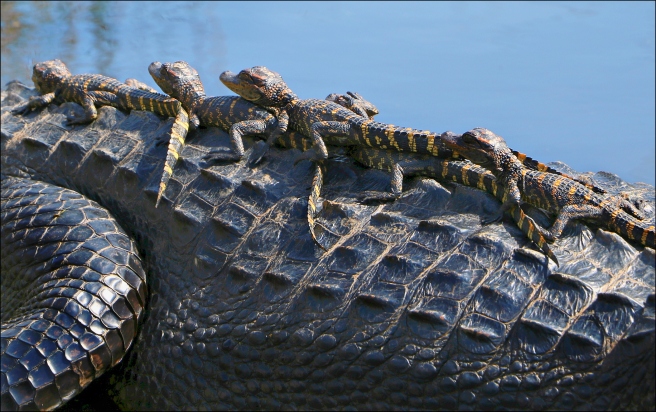 A different mother and babies, seen from the same boardwalk

Once young alligators reach 4 feet in length, they’re considered virtually invulnerable in the wild, except to humans and larger alligators. Separating from their pods, they begin to live independent lives.

This one, which had retreated to a spot beneath the Brazoria refuge’s pavilion during a time of especially high water, was almost exactly four feet long. His (?) willingness to pause beneath the pavilion steps made his size easy to determine.

There’s no question he was the most beautiful alligator I’ve seen. Free of mud and more colorful than older gators, he was easy to photograph from above as he moved farther onto the land. It was an unusual opportunity, and a memorable one.

Comments always are welcome.
Click any image for greater size and detail.

72 thoughts on “When a Little Distance Makes Sense”