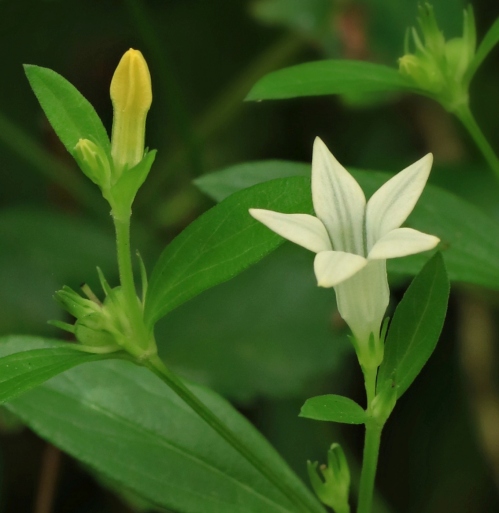 During my explorations of the area surrounding the San Bernard Oak, the most intriguing discovery involved this tiny flower. I’d never seen anything like it and, as it turned out, there’s a very good reason.

Spigelia texana, or Texas pinkroot, is one of our state’s endemics. Unlike other members of the genus found in the state, it’s considered rare, and occurs in only a few counties.  A member of the family Loganiaceae, the genus contains around sixty species; Spigelia honors Adriaan van den Spiegel (1578-1625), professor of anatomy at Padua. Most plants in the genus are known as pinkroots.

Spigelia texana can be found in bottomland hardwood forests along the east Texas coastal plain, in soil containing sand or clay. Only a few inches tall, its funnel-shaped flowers are about a half-inch long, and marked inside with the greenish lines that help to identify it. Another species found in the state, the prairie pinkroot (S. hedyotidea), is similar in appearance, but contains lavender lines inside the flower.

A third species known as Indian pink (Spigelia marilandica), is far more common, reaching from Florida across the Gulf coast states to far eastern Texas. Its bright red and yellow flowers are favored by gardeners because of its color, it’s tendency to clump, and its attractiveness to hummingbirds.

Jason, of Garden in the City, was kind enough to share photos of his Indian pinks. Once I’d identified Texas pinkroot, its similarity in shape to Indian pinks became obvious. 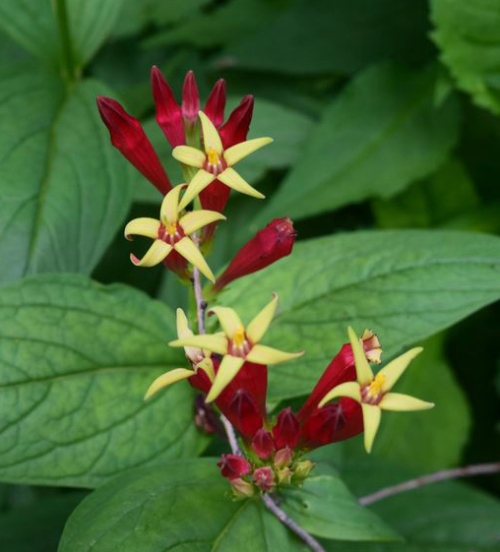 As its name suggests, the prairie pinkroot (S. hedyotidea), is found farther inland. This photo by Bob Harms shows the clear resemblance to the Texas pinkroot; since prairie pinkroot grows in areas I also visit, I may recognize it if I come across it there.