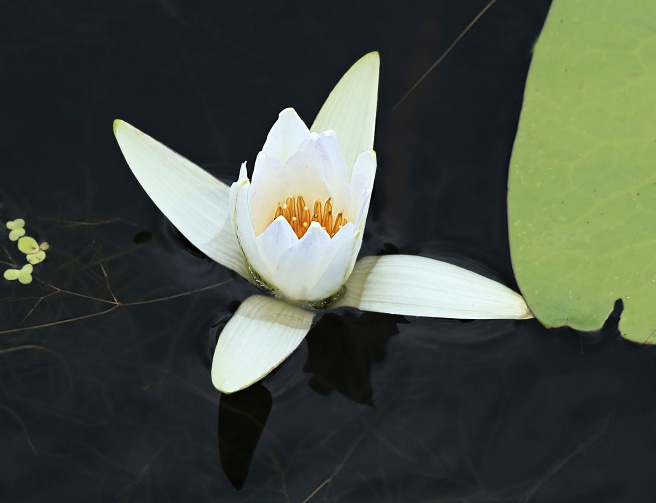 Today, rising creeks and rivers are afflicting some parts of our state, but soon enough the rains will depart and summer will arrive: its rising heat and humidity making February’s freeze seem even more improbable.

A different sort of rising is taking place in area freshwater ponds and lakes. This weekend, I found three species of native water lily thriving at the Brazoria Wildlife Refuge. Michael Eason describes the white water lily shown above, Nymphaea odorata, as the most freeze-tolerant of our native species.

On the other hand, the yellow water lilies also seem to have prospered through the winter months; a dozen or so already were in bloom.

The tropical water lily doesn’t float on the water’s surface, but rises above it on peduncles, or stems, several inches in length. Its sepals are marked with the same colors as its leaves, which are purple on the bottom and green above.

The genesis of one common name for Nymphaea odorata, ‘alligator bonnet,’ is easy to understand. Innumerable alligators, both young and old, were cruising among these flowers; its easy to imagine one of the creatures rising to the surface, flower-bedecked and smiling.