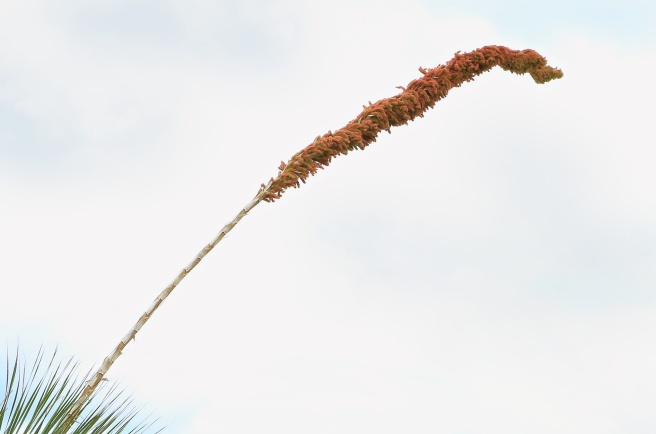 After I encountered the yucca-like plant known as Texas Sotol alongside a road leading into Bandera, it never occurred to me that I might find it growing in my own area. Several species are native to Mexico, but only three make their way into Texas. Texas Sotol (Dasylirion texanum) is most common, extending into the Edwards Plateau, while Common Sotol (D. wheeleri) and Green Sotol (D. leiophyllum) are limited to arid, rocky habitats in far west Texas.

None of the plants is native to our coastal counties, and yet there it was: an impressive example of Texas Sotal blooming away at the Brazoria Wildlife Refuge on a wet and cloudy day. The sheer size of the bloom stalk compelled attention. The flowers began well above my head, making the bare portion of the stalk at least six feet long. The normal length of a bloom stalk on Texas Sotol is between nine and fifteen feet, so this one was well within the normal range.

The stalk itself was about nine inches in circumference: sturdy enough to support the dramatic collection of flowers. The top of the trunk sometimes is visible, but it’s often buried underground, leading to an easy confusion of sotol with yucca.

The flowers themselves are dioecious, with male and female appearing on separate plants. Their color is variously described as yellow, creamy green, or ivory, but whatever their color, they typically bloom from May to August, attracting hummingbirds in the process. I suspect, but don’t know, that the rosy tinge on these flowers is due to the natural aging process.

Though I wished at the time for blue skies, better light, and a step ladder, even less than perfect images of the flowers above my head were a treat. (Do click any of the images for more detail.) Since the plant doesn’t bloom on a predictable schedule, and may not bloom at all in a given year, it’s impossible to know when I might see this again. 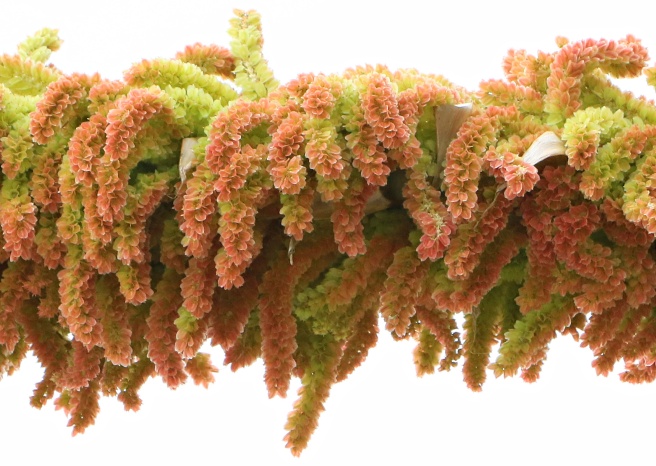 68 thoughts on “Surprised by Sotol”