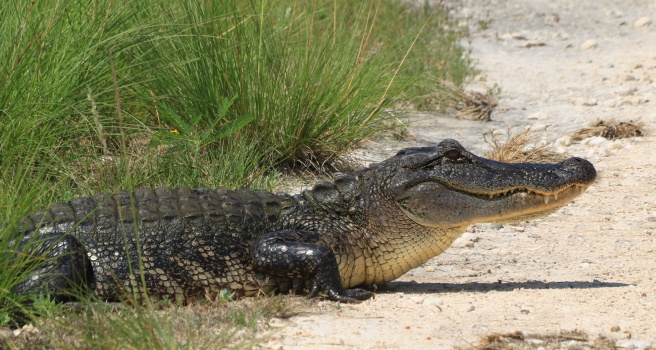 In the fall of 2019, I visited the Brazoria Wildlife Refuge in the company of Steve and Eve Schwartzman. As we approached one of the ditches that threads through the refuge, we came upon a Great Egret fishing at the water’s edge; eventually, that bird’s photo appeared as an entry on Steve’s Portraits of Wildflowers blog.

Just over a week ago, I was traveling the same road, but when I came to the same ditch, I discovered a different creature emerging from the water. This handsome alligator had hauled itself up the bank and onto land, obviously intending to cross the road. It seemed to be as surprised as I was, and we sat there for several minutes, eyeing one another.

After ten minutes or so, it seemed as though the staring contest could go on for some time, so I decided to continue down the road. As I slowly drove past the gator, about three feet off the end of his nose, that fearsome creature didn’t snarl, hiss, or charge the car. Instead, without changing expression, he slowly pushed himself away, slid backwards down the bank, and disappeared beneath the water. No doubt he was waiting for the traffic to clear.

74 thoughts on “A Close Encounter of the Alligator Kind”