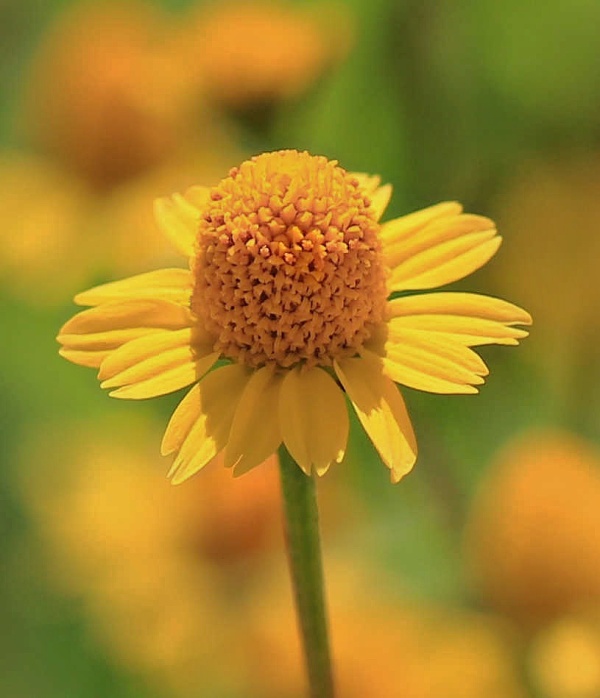 During a visit to the Brazoria Wildlife Refuge on September 29, 2019, I noticed a ditch filled with pretty yellow flowers. The colony was perhaps twenty feet long, and the low-growing plants held one bloom per stem. Less than an inch across, the combination of tiny ray flowers and conical disk flowers was cute as could be; the disk flowers reminded me of the radar domes found on boats.

As sometimes happens, it took time to identify the plant. It wasn’t until this fall that I recognized it as Opposite-leaf Spotflower. First named Anthemis repens by Walter Thomas in Flora Caroliniana in 1788, today it’s listed as Acmella oppositifolia (Lam.) R.K. Jansen var. repens or more simply as Acmella repens.

In the southern United States, Opposite-Leaf Spotflower grows on river banks, along pond edges, and in wet ditches. Its ability to survive occasional saltwater inundation no doubt helps it to thrive in Brazoria County, where I’ve now discovered it in every refuge, as well as in occasional country ditches.

As for identification, it was technology to the rescue. The only one of my field guides that mentions the plant is Ajilvsgi’s Wildflowers of Texas — where it’s called Creeping Spotflower — but I missed finding it there, and various keyword searches online didn’t turn it up. I tucked its photo into the “Unidentified Plants” file on my computer, where it lingered for months.

Then, after downloading the app called Picture This to my first iPhone, I decided to try taking a photo of the flower: not from its natural location, but from my computer file. Within seconds I had a name, and in only a minute or two more I’d found its image and details on a multitude of sites. It was a delicious irony. My pretty yellow phone — which I’ve named ‘Sunshine’ — had allowed me to spot the pretty yellow Spotflower at last.

57 thoughts on “A Little Spot of Sunshine”