It’s taken time, but eventually I came to understand that not every smaller, white wading bird I encountered at the edge of ponds or on the tidal flats was a Snowy Egret. In the first year of its life, the Little Blue Heron (Egretta caerulea) is white, showing no more than dusky blue or gray shadows on the tips of its feathers.

Greenish-yellow legs and feet, together with a bill that tends toward pale gray rather than black also helps with identification. The Sibley guide mentions that many immature Little Blue Herons show a short pointed plume or two on the back of their heads; I may have captured that feature in the first photo.

As the bird matures, it takes on a mottled, or piebald, appearance as white feathers are replaced. 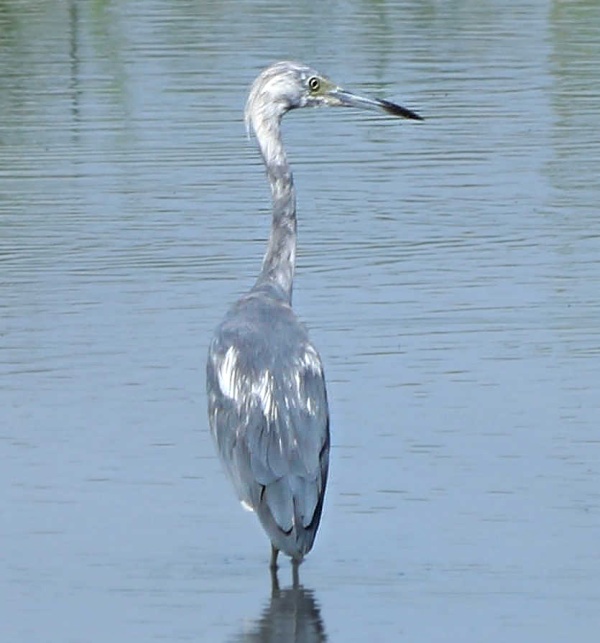 Adult birds may seem uniformly dark at a distance, but in fact their feathers present a pleasing combination of maroon and a dark slaty-blue. Their legs remain green; combined with their yellow eyes and a pale blue bill tipped with black at the base, they’re fairly easy to identify.

In the past, I sometimes confused adult Little Blue Herons with Reddish Egrets, despite their color differences; Reddish Egret feathers have been described as cinnamon and steel.

Apart from those color differences, behavior helps to distinguish the birds. The Reddish Egret is a frenetic forager: chasing fish by running back and forth, opening and shutting its wings, and stirring up sediment with its feet. The Little Blue is a sedate stalker: as elegant on the hunt as in moments of rest, and equally beautiful.

An elegant pair at the Brazoria refuge