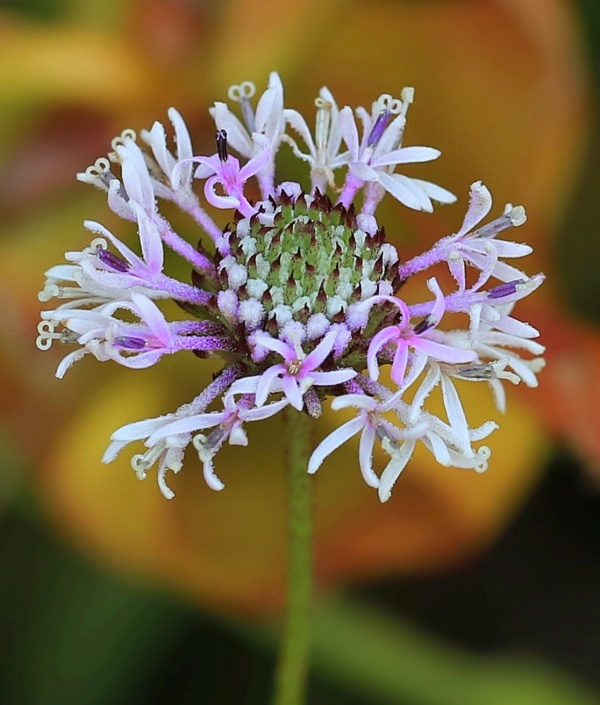 Grassleaf Barbara’s Buttons (Marshallia graminifolia) bloom from late summer through early fall in the wet flatwoods and prairies, seeps, and bogs of east Texas’s Big Thicket. Here, the warm hues of a pitcher plant flower provide a glowing background for the emerging disk florets of this small, button-like flower.

A member of the Asteraceae, or sunflower family, the plant’s dome-shaped flower heads sway atop slender stems as much as sixteen inches tall. Like its family-mate the Basket-flower, Barbara’s Buttons have disk flowers but no rays: a characteristic that increases their resemblance to one another in shape, if not in size.

The genus name Marshallia honors Humphry Marshall (1722-1801) and his nephew Moses Marshall (1758-1813), American botanists active in and around Pennsylvania during the Colonial period. The specific epithet graminifolia refers to the plant’s grasslike leaves.

Although every species in the genus is known as Barbara’s Buttons, the identity of ‘Barbara’ remains unclear.  It seems the name first appeared in print in botanist John Kunkel Small’s 1933 book, Flora of the Southeastern United States.

Whatever the source of the flower’s common name, it’s quite attractive to late-season pollinators like butterflies, beetles, and bees, and a lovely bit of lingering color as the season begins to change.

61 thoughts on “Buttoning Up Summer”