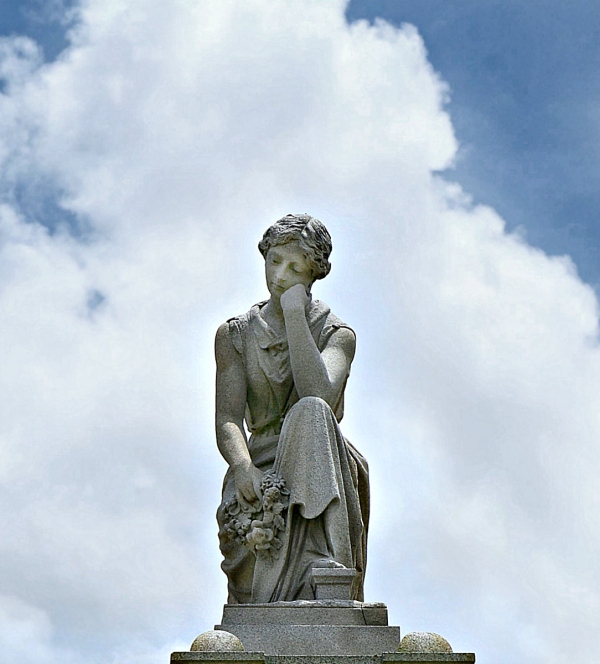 The last sunbeam
Lightly falls from the finish’d Sabbath,
On the pavement here—and there beyond, it is looking
Down a new-made double grave.

Lo! the moon ascending!
Up from the east, the silvery round moon;
Beautiful over the house tops, ghastly phantom moon;
Immense and silent moon.

I see a sad procession,
And I hear the sound of coming full-key’d bugles;
All the channels of the city streets they’re flooding
As with voices and with tears.

I hear the great drums pounding,
And the small drums steady whirring;
And every blow of the great convulsive drums
Strikes me through and through.

For the son is brought with the father;
In the foremost ranks of the fierce assault they fell;
Two veterans, son and father, dropt together,
And the double grave awaits them.

Now nearer blow the bugles,
And the drums strike more convulsive;
And the day-light o’er the pavement quite has faded,
And the strong dead-march enwraps me.

O strong dead-march, you please me!
O moon immense, with your silvery face you soothe me!
O my soldiers twain! O my veterans, passing to burial!
What I have I also give you.

The moon gives you light,
And the bugles and the drums give you music;
And my heart, O my soldiers, my veterans,
My heart gives you love.

While an assortment of wildflowers strews vibrant spring color across the Texas landscape, pastel lavenders and pinks do their own part to decorate the season.

One of my favorites, Herbertia lahue, or prairie nymph, is a small and delicate member of the iris family. The flowers appear for only two or three weeks, and each flower lasts for only one day; finding an entire colony at the Varner-Hogg plantation outside West Columbia was as lucky as it was delightful.

Originally owned by Martin Varner, a member of Stephen F. Austin‘s Old Three Hundred and a veteran of the Texas Revolution, the property’s last owner was James Stephen Hogg, the first native Texan to be elected governor. Donated to the state in 1958 by Governor Hogg’s daughter Ima, the historic site provides a view of plantation life in Texas between 1835 and 1850, the time of the plantation’s greatest productivity.

Contrary to jokes told even during her lifetime, Ima Hogg didn’t have a sister named Ura, but she was a remarkable woman and a great philanthropist. After helping to found the Houston Symphony Orchestra in 1913, she became president of its board in 1917. Elected to the Houston Board of Education in 1943, she arranged symphony concerts in public schools and worked to increase the number of music and art classes available to students.

Eventually she donated Bayou Bend, her home in the River Oaks neighborhood of Houston, to the Houston Museum of Fine Arts. The antiques-filled house and formal gardens are balanced by woodlands filled with native trees and shrubs: a testament to her conviction that the same  plants that grew wild on the plantation at the edge of Varner Creek should have a place to thrive in the heart of Houston. I doubt there are prairie nymphs at Bayou Bend, but out at the old plantation they’re doing just fine. 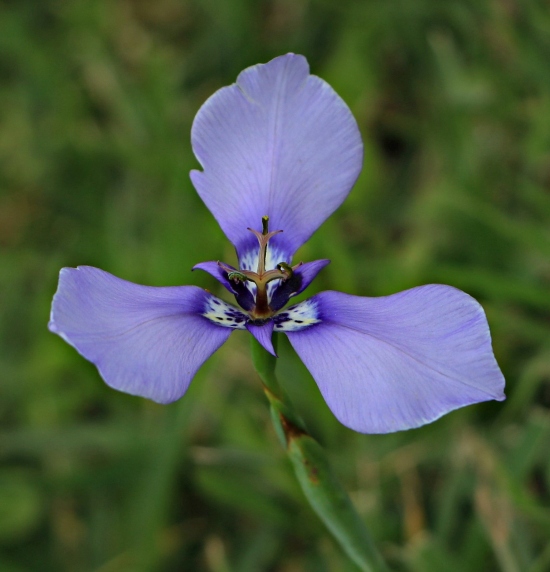 A voice from the dark called out,
‘The poets must give us
imagination of peace, to oust the intense, familiar
imagination of disaster. Peace, not only
the absence of war.’

But peace, like a poem,
is not there ahead of itself,
can’t be imagined before it is made,
can’t be known except
in the words of its making,
grammar of justice,
syntax of mutual aid.

A feeling towards it,
dimly sensing a rhythm, is all we have
until we begin to utter its metaphors,
learning them as we speak.

A line of peace might appear
if we restructured the sentence our lives are making,
revoked its reaffirmation of profit and power,
questioned our needs, allowed
long pauses . . .

A cadence of peace might balance its weight
on that different fulcrum; peace, a presence,
an energy field more intense than war,
might pulse then,
stanza by stanza into the world,
each act of living
one of its words, each word
a vibration of light—facets
of the forming crystal.

Political refugee, explorer, diplomat, newspaperman: all these aspects of his life help to make Ferdinand Lindheimer one of the more interesting early Texans. But it was his life as a botanist that most firmly secured his place in history.

After settling in New Braunfels, Texas, he began building his reputation as the “Father of Texas Botany” by collecting, categorizing, and sharing hundreds of plants. Taxonomic changes over the years make it hard to pin down exactly how many bear his name today, but at least thirty seems a reasonable number, and there may be more.

A mural on the west side of the Hoffman Building in New Braunfels, completed in 2001 by San Antonio artist Alex Brochon, shows Lindheimer holding a small bouquet of flowers: Lindheimera texana, or Texas yellowstar.

Lindheimer originally named the plant Lindheimeria texensis,  but referred to it affectionately as his “little asteroid.”***

In a May, 1842 letter written to George Engelmann, another German-American botanist, his association of botanical immortality with the flower becomes clear:

Did you write my name among the stars with this little Asteroid? Did I serve botany in that way? Not by knowledge of it, but by love of this sleeping, dreaming daughter of Flora?

A particularly delightful aspect of Lindheimer’s star is its ability to shine on even after its vibrant yellow petals have faded away. Its gone-to-seed structure is so pleasing, so appealing in its own right, I’ve often wished one or two had been included in Lindheimer’s mural bouquet. I’ve no doubt he loved even these dimming little asteroids.

***Note: Since posting, I’ve discovered that George Engelmann proposed the name Lindheimeria texana to Asa Gray, and told Lindheimer about that in March of 1842. In her book, A Life Among The Texas Flora, Minetta Altgelt Goyne ascribes the naming to Lindheimer, but that seems not to be so. More details can be found in comments to WOL and Steve Schwartzman, below. 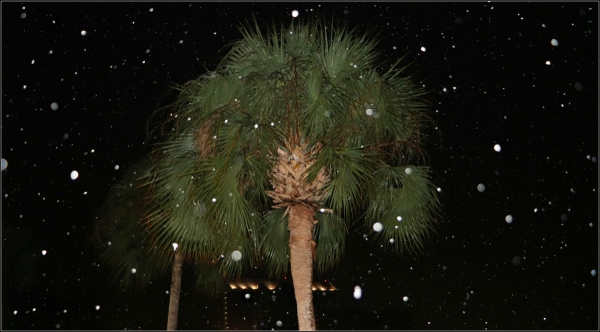 At first, it was only a gentle tapping of sleet against the window, but it was enough to waken me, suggesting that something more than a cold rain might be in store.

The forecasters had seemed confident of snow, so I got up and began watching. Before long, flakes appeared: not many, and not so dramatic as those recorded earlier in the evening by people all along the coastal plain, but flakes nonetheless. Despite the hour — 4 a.m. — there was only one thing to do. I put on a pot of coffee, and got dressed. 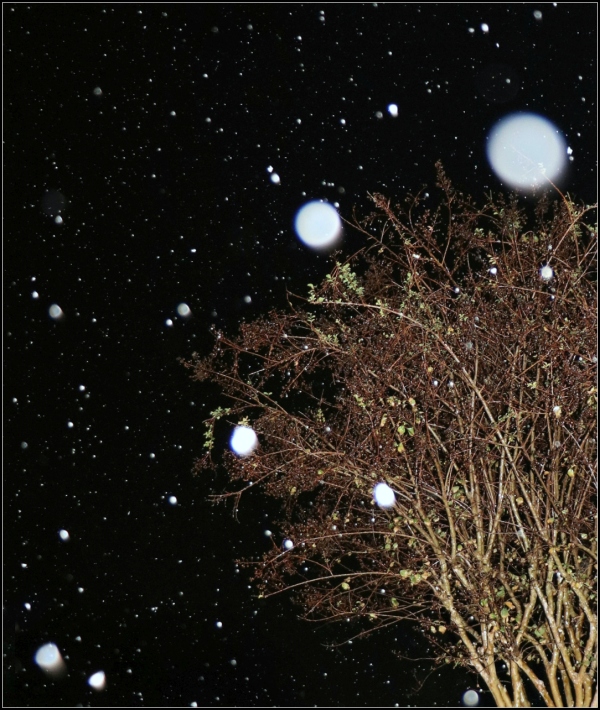 By six o’clock, an inch had fallen. Temperatures along the water always are a few degrees warmer than those farther inland, so our snow was a bit slushy; it didn’t accumulate on the grass, and began melting almost immediately on plants. Still, on rooftops, table tops, and the cold fiberglass of boats, it stayed until well after dawn. 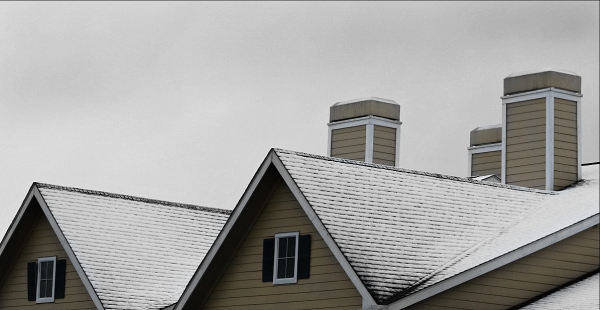 Even run-of-the-mill rooftops took on new interest with the addition of snow.

Enjoying the morning’s novelty, I remembered a poem published in the Galveston Daily News on February 14, 1895. On that day, a truly significant snowstorm struck the Texas coast, piling up from 21 to 28 inches of snow.  The anonymous author of a slightly awkward verse titled “The Texas Coast Land” first described the delights of the Texas coast — flowers, birds, sand, and gentle breezes — and then concluded:

If you think it doesn’t freeze here,
Ne’er grows cold and never snows here,
Then you surely should have been here
On the day you see below here.
For it surely was a hummer
And proved it is not always summer
In the Texas coast land.

For an account of the famous — and far more substantial — 2004 Christmas Eve snow known locally as “The Christmas Miracle,” please click here.