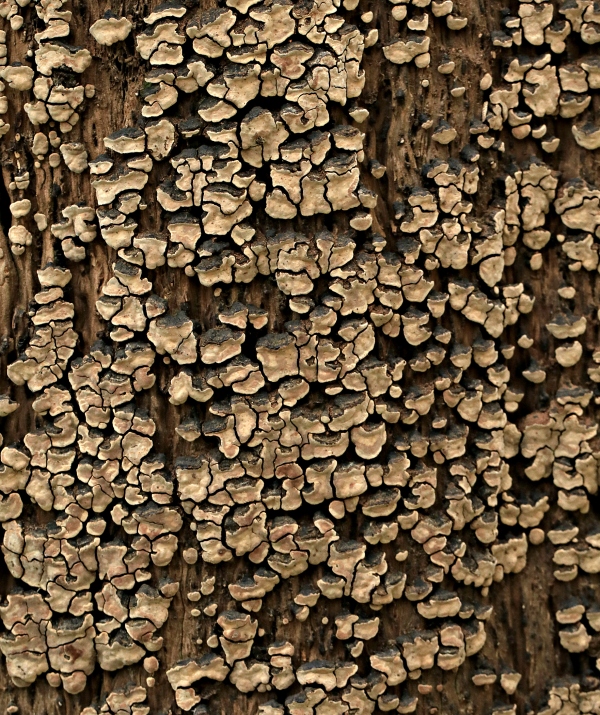 In January, fallen leaves and dying vines make it easier to follow deer trails into the woods. Yesterday, along one of those trails, I found a rotting tree covered with this oddly attractive substance. Hard and smooth to the touch, the strange bits reminded me of scattered pieces of a jigsaw puzzle. I assumed the substance was either lichen or fungus: determining which was the next step.

As it turned out, that next step was relatively easy. Alexey Sergeev, a researcher whose interests are focused on such things as quantum-mechanical perturbation theory and who currently works at Tulane University, also spent time at Texas A&M in College Station. During those years, he photographed hundreds of Texas plants, as well as a good number of fungi, mosses, algae, and lichens, providing the date, location, and scientific name of each.

A search of his site using the phrase ‘fungus on oak’ found a match to my photo almost immediately, in the eighth row on the page. Ceramic parchment fungus — Xylobolus frustulatus — generally forms on the dry, well-decayed wood of oaks: precisely where I found it. Known as a crust fungus, X. frustulatus received its common name because it often looks like whitish tile fragments put together with black grout. Known as a saprobe, the ceramic parchment fungus survives by decomposing dead or decaying organic material and using it as food.

Another site, Fungus Fact Friday, provided a few more interesting details, including a way to determine the age of the fungus:

Each ’tile’ (or ‘frustule’ to mycologists) is shaped like an irregular polygon, has a smooth, white top, has sides that are black or dark brown, and has a wood-like consistency. The upper surface is irregularly lumpy but smooth and bears an uncanny resemblance to ceramic in both texture and color. It is from this surface that the spores are released. As the mushroom ages, this surface becomes pale pinkish to pale orangish with mature spores and then slowly turns brown.

Reading that, I couldn’t help thinking that, with age, this fungus appears less like a ceramic tile and more like a Scrabble tile. In either case, its appearance is fascinating.

The Poets’ Birds: The Mockingbird (and a Donkey)

The Carol of the Guardians

A View to the East