Newly arrived in hurricane country, it took time for me to recognize one of the quirkier realities of life on the Texas coast. Prior to a tropical system’s arrival, the weather often is glorious. Good weather provides time to slap plywood on windows or make a final trip for supplies; while it may tempt the unwary into a false sense of security, it gives the already-prepared a bit of breathing room ahead of the storm.

Yesterday was a day to breathe: not only to breathe in the color-rich sunrise and sunset, but also to delight in a blue-sky day arching above the treasures of the beach. 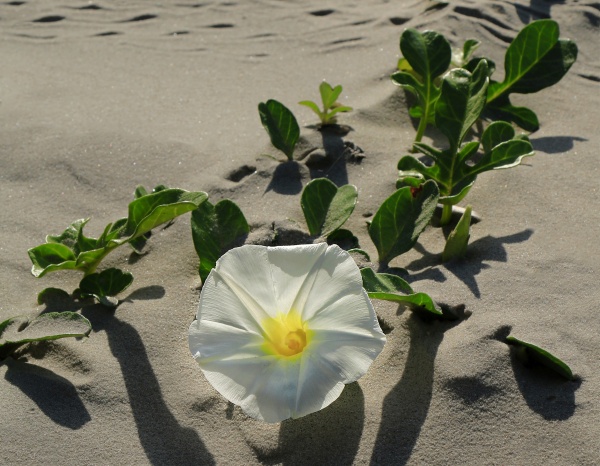 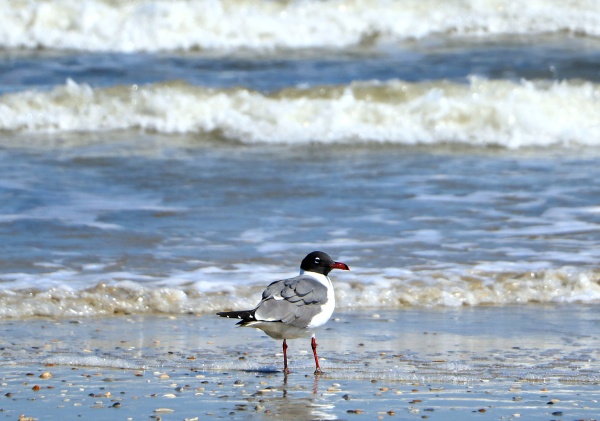 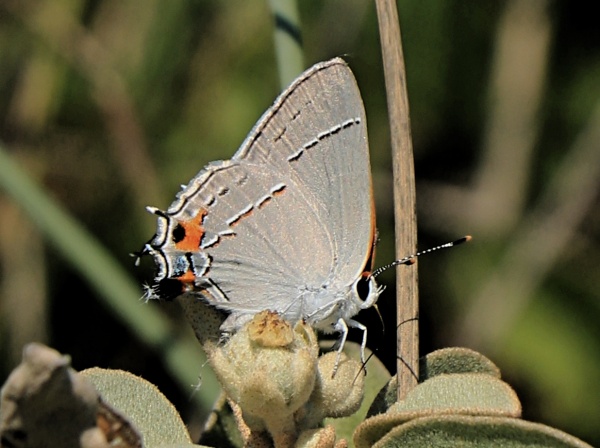 Washed up ~ perhaps soon to be washed out

Now, the rain bands have arrived, while offshore winds and wave heights are increasing.  It’s time to pause, to go inside, and wait to see what will be left in Nicholas’s wake.

One of our earliest-blooming wildflowers, pink evening primrose (Oenothera speciosa) often covers fields, highway verges, and vacant urban lots with a dazzling combination of pink and white blooms. Despite its common name, the flowers sometimes open in the morning, inviting insects such as this tumbling flower beetle (Mordella sp.) to visit.

Despite their drought tolerance, these primroses don’t flourish in the temperatures of late summer; as the heat rises, the flowers begin to disappear from the landscape.

That said, I had to smile when I found this isolated group blooming away in the middle of a caliche road. Undeterred by late July temperatures or their less than perfect soil, they clearly deserved to be honored as botanical road warriors.

A blooming Button in the Big Thicket’s Solo Tract

All species in the genus commonly are known as Barbara’s buttons, although the identity of ‘Barbara’ is unknown. The common name first appeared in John Kunkel Small’s Flora of the Southeastern United States; published in 1933. The genus name, Marshallia, honors American botanists Humphry Marshall (1722-1801) and his nephew Moses Marshall (1758-1813), while the species epithet refers to the plant’s grasslike leaves.

Although a member of the sunflower family, the flower heads are composed only of disc florets; ray florets, often sometimes called ‘petals,’ are absent. In bloom, the flower’s compact form makes a comparison with buttons understandable; as buds, they seem even more button-like. 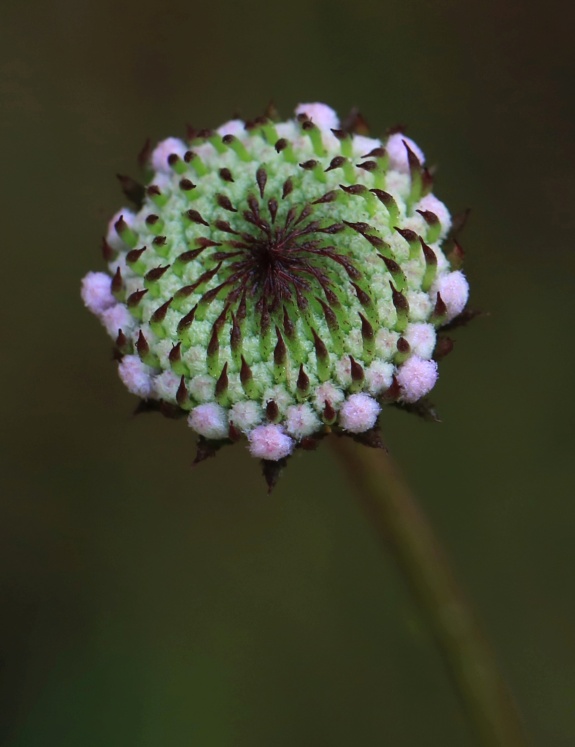 An interesting aspect of the flower is the way it sometimes comes into bloom: asymmetrically, if not erratically. I’m often amused by the forms it takes. Here, Barbara looks less like a button and more like a pig-tailed bud that’s cute as a button. 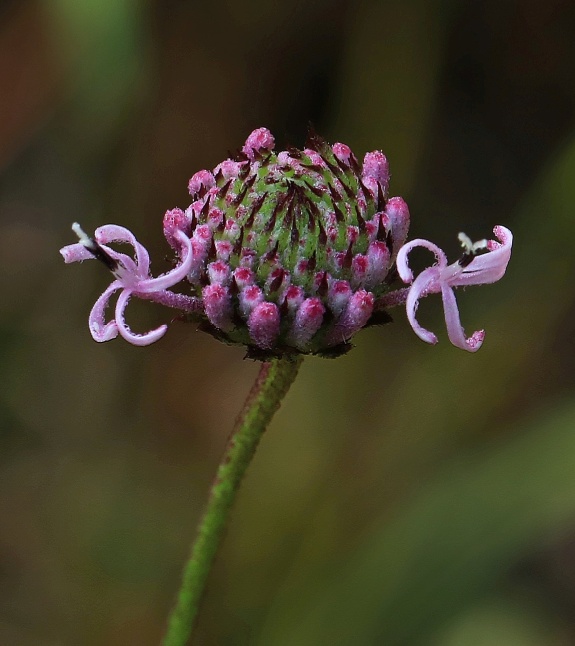 I caught this flower presenting a tentative wave to the world. Perhaps it felt a bit buttoned-up, and sent one of its florets to determine if it was safe to bloom. 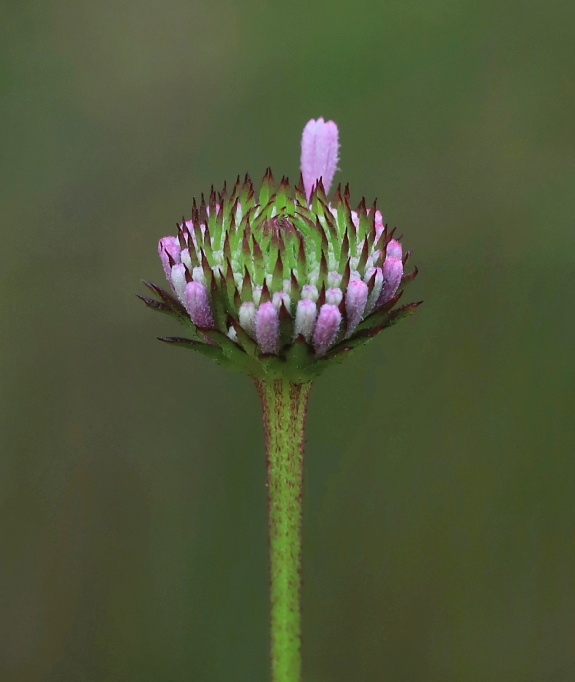 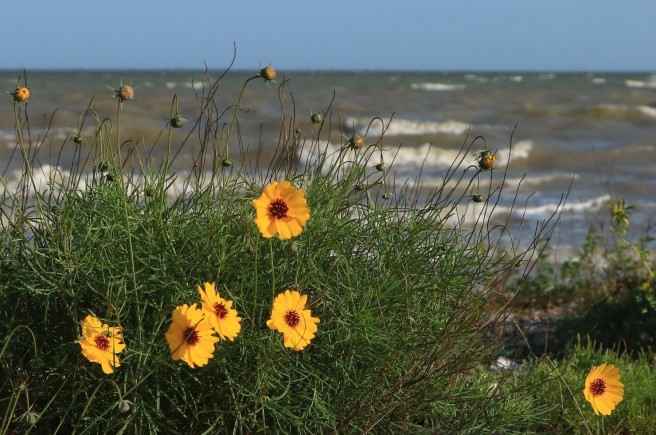 To see a World in a Grain of Sand

And a Heaven in a Wild Flower

Hold Infinity in the palm of your hand

And Eternity in an hour… 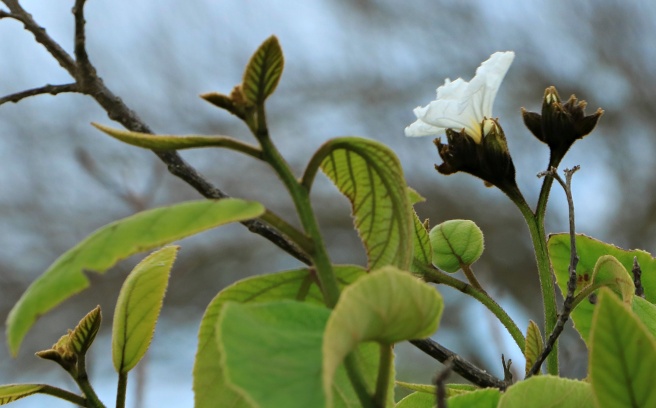 Despite its name, the Mexican Olive, or Anacahuita, doesn’t produce true olives. A member of the Borage family, Cordia boissieri is more closely related to flowers such as Comfrey, Heliotrope, and Forget-Me-Not.

Butterflies and hummingbirds frequent the blooms, while the fleshy fruits — which do resemble an olive in shape and color — are palatable to birds, deer, and cattle. Don’t add one to your martini or tapenade, though; the fruits’ slight toxicity makes them unfit for human consumption.

Native to only a few counties in far south Texas and to portions of northeastern Mexico, the plant rarely exceeds a height of twenty feet. It tends toward shrubbiness, but can be pruned to become more tree-like. No matter its shape, it blooms through most of the year with showy, trumpet-shaped flowers that glow against its dark leaves. 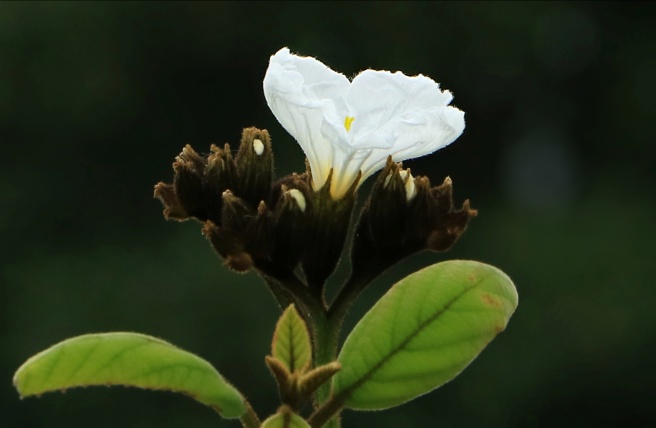 Pest and disease free, Texas olive’s greatest downside is its dislike of cold weather. In the normally frost-free region of south Texas, Mexican olive thrives, but survival in areas like Austin and San Antonio is less certain. At that northern limit of its range, the trees often are smaller, and deciduous or evergreen depending on the weather.

After Texas’s state-wide freeze last February, the single specimen tree at the Brazoria Wildlife Refuge seemed to have succumbed to the harsh conditions; its leafless branches suggested it never would survive. Then, I noticed a few leaves, followed by small but perfectly formed buds. In time, normally-sized flowers once again bloomed: delighting my human eyes as well as the bees, butterflies, and hummingbirds that find it so appealing. 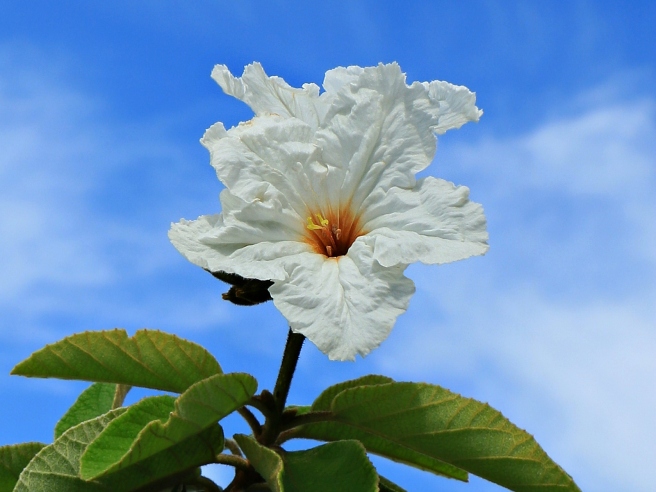