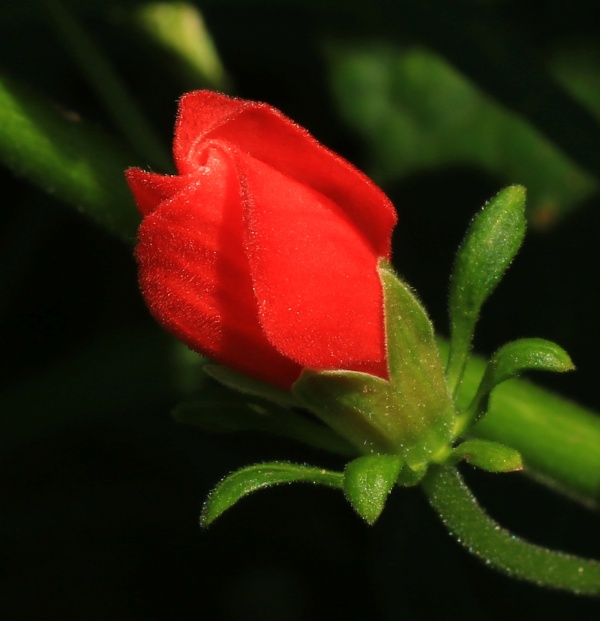 The first Turk’s Cap bloom of the season

When I visited Walden West on February 1, only a few Turk’s Cap leaves had managed to sprout. At the time, I predicted their vibrant flowers would begin appearing at the pond edges in a few weeks, and it seems my prediction was right.

On May 2, although only the single flower shown above had emerged, buds were forming everywhere. When I make my June visit, I suspect many more Turks’ Caps (Malvaviscus arboreus var. drummondii) will be shining in the woods. 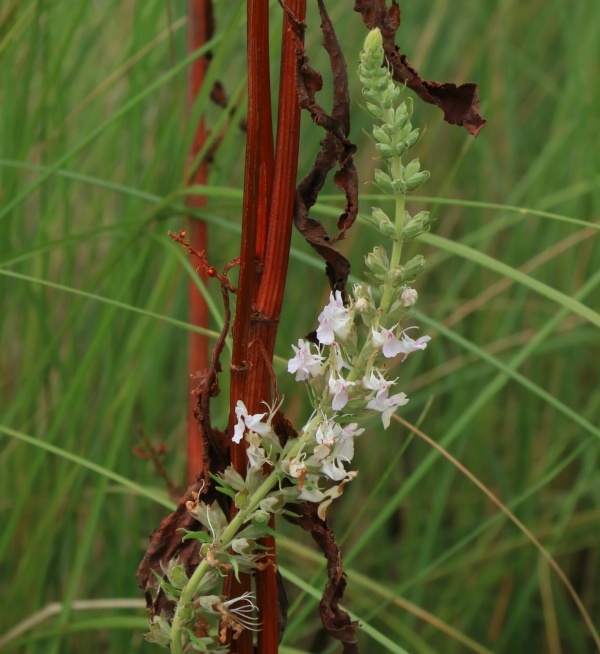 By early May, as fields of Bluebonnets and Indian Paintbrush began to fill the roadsides and fields, less noticeable but equally attractive flowers were emerging at Walden West.

American Germander (Teucrium canadense), a member of the mint family often found at the edges of ponds and marshes, clearly had been blooming for some time. Like Coastal Germander (T. cubense), a smaller plant with pure white flowers, American Germander flowers have a greatly reduced upper lip and a long lower lip. That long lip doesn’t mean the flower is pouting; it’s simply providing a landing pad for insect visitors. 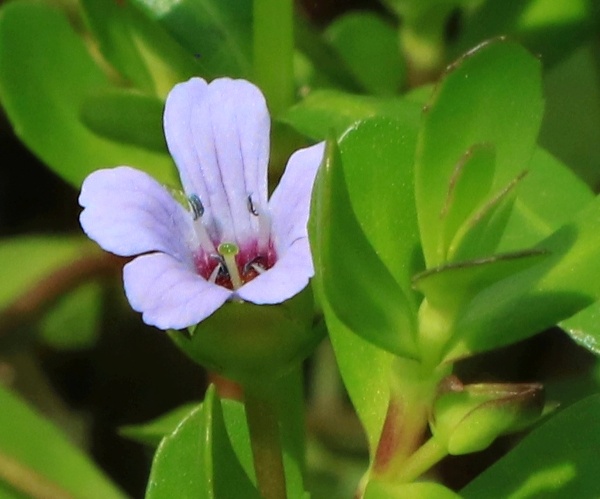 The solitary, bell-shaped flowers of Water Hyssop (Bacopa monnieri)  were new to me. According to Shinners & Mahler’s Flora of North Central Texas, the genus may carry a South American aboriginal name; the specific epithet honors Louis-Guillaume Le Monnier (1717–1799), a French natural scientist.

A mat-forming aquatic or semi-aquatic perennial, its small, white flowers sometimes are tinged with pink or blue. Also known as Herb-of-grace, the plant is a larval host for the White Peacock butterfly.

Now considered a member of the Plantain family, Water Hyssop formerly was included in the Figwort Family, and still is listed there in many sources. At Walden West, I found only a few plants, but it may be that as the summer progresses they will multiply. 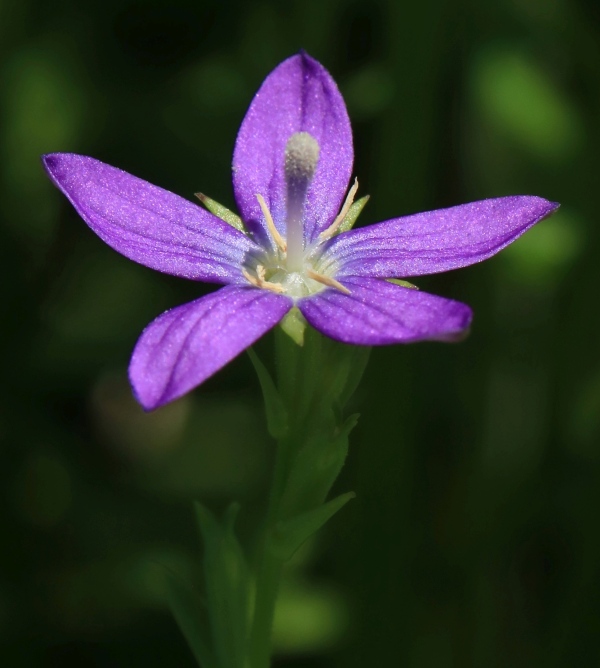 I’ve never found more than three or four stems of Venus’s Looking Glass in one location, but they do appear in every refuge I visit and at several locations on Galveston Island. Two were blooming at Walden West in early May; this one, and a second, shabby example that had been nearly nibbled to extinction by some insect.

Two other bits of lavender — Texas Vervain and Slender (or Rigid) Vervain also put in an appearance. Neither was abundant, but it may be that these were among the first to bloom. 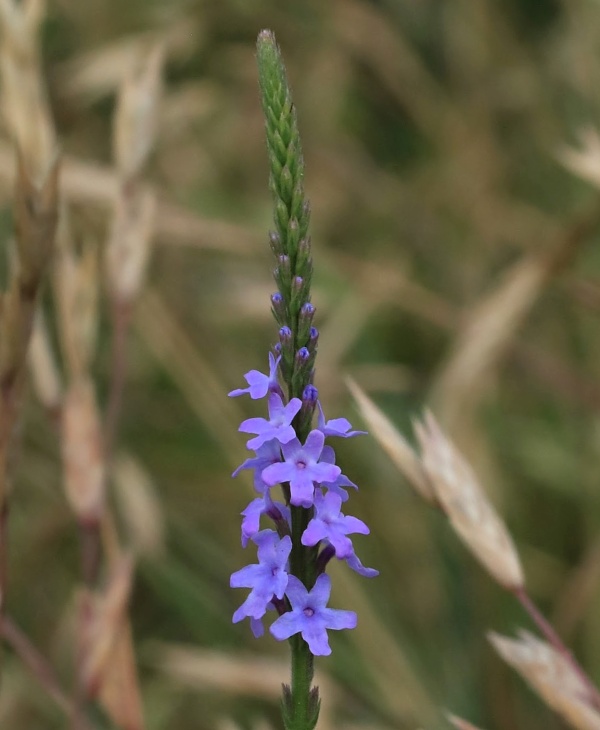 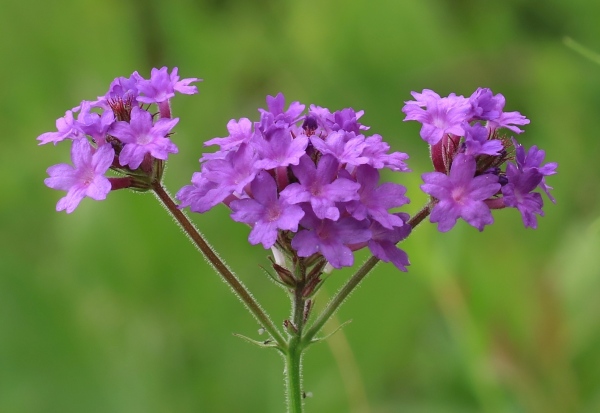 As I looked past the vervains, a flash of white led me to a small stand of Whitetop Sedge.Their brilliant white bracts sometimes are confused with petals; they certainly are as attractive as any white flower. A somewhat showier species, Rhynchospora latifolia, is taller, with wider bracts; in Texas, it appears in the far eastern portions of the state. 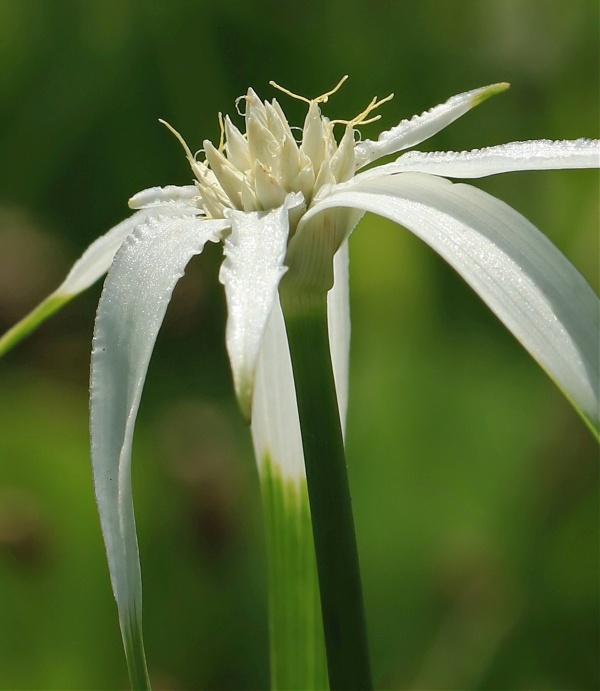 Sedges tolerate shade, grow in a wide variety of soils, and occasionally can be found submerged in shallow waters. When they fill roadside ditches, the effect is remarkable. 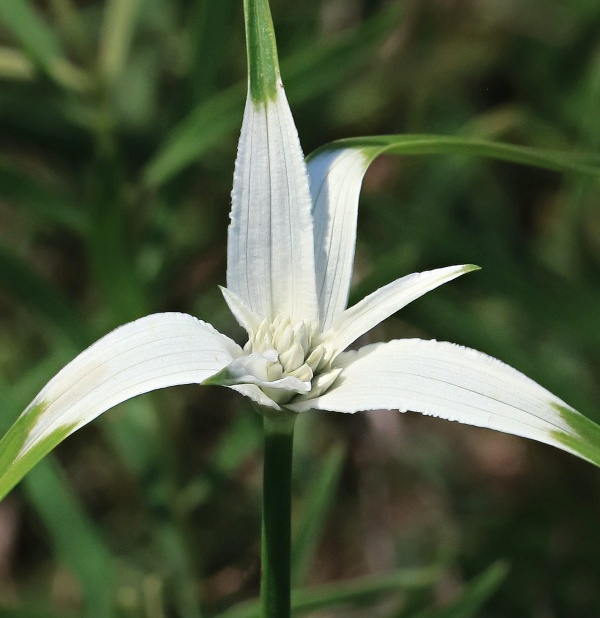 Despite a relative absence of birds, increasing insect activity was obvious. This web, constructed only inches from the ground, indicated the presence of a very busy, if invisible, spider. 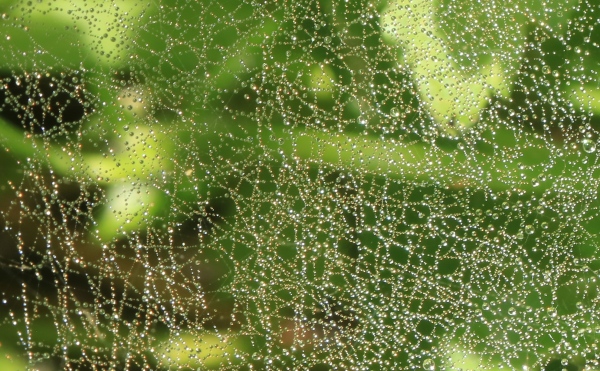 Say hello to the WWW ~ a Walden West Web

High above the ground, a Spiny-backed Orb Weaver (Gasteracantha cancriformis) went about her work. The six abdominal projections resembling spines give the spider its common name. It’s colors can be quite variable; I’ve seen orange spiders with black spines, white ones with red spines, and now this lovely yellow creature with black spines. 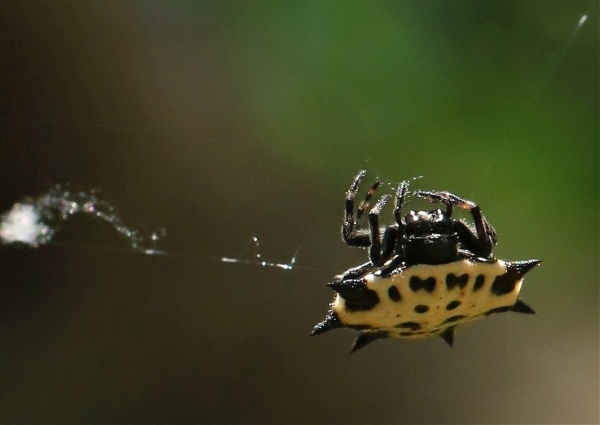 Conspicuous tufts of silk scattered about on this orb-weaver’s web are especially interesting.  They appear primarily on the foundation lines; it’s been suggested that the tufts make their webs more visible to birds that might otherwise destroy them.

Perhaps this bee didn’t notice those tufts of silk; he certainly didn’t notice them in time to avoid becoming entangled. While I couldn’t find the spider responsible for the web-work, the tufts do suggest a spiny-backed orb weaver had caught iself a meal. 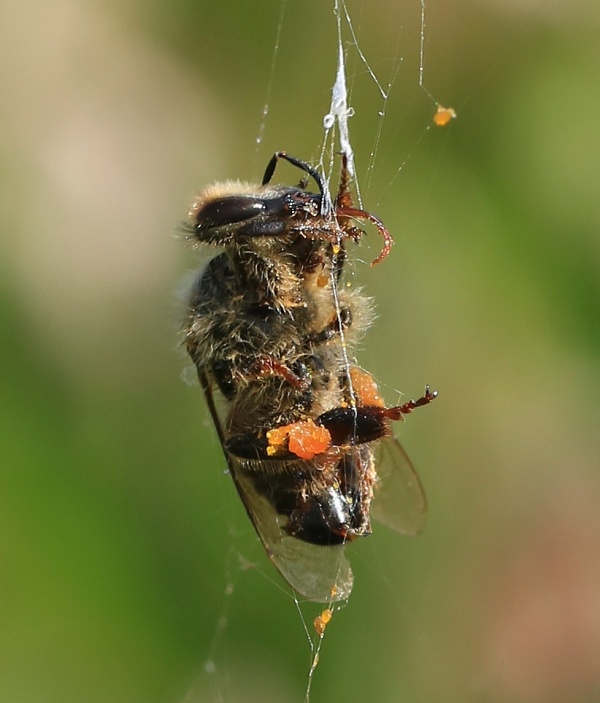 Even dragonflies aren’t immune to capture. This one may have surprised the spider lurking below one of its wings at the bottom of the frame. If that tiny spider set out the web, it may have gotten more than it bargained for. 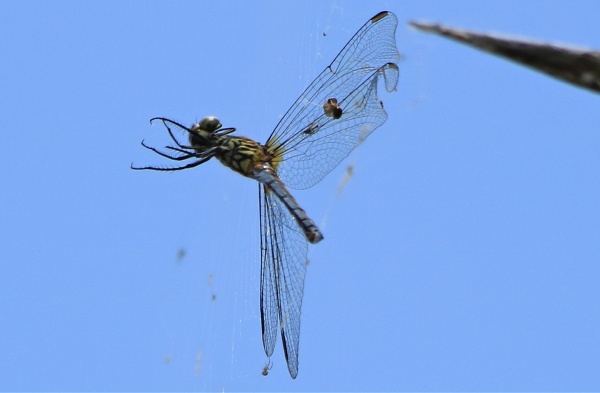 Come into my parlor, said the spider to the dragonfly

Other, luckier dragonflies flitted over and around the water,  including a female four-spotted pennant and the easily recognizable Halloween Pennant. 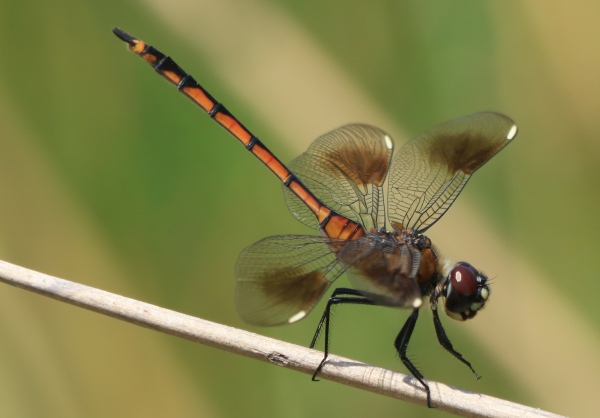 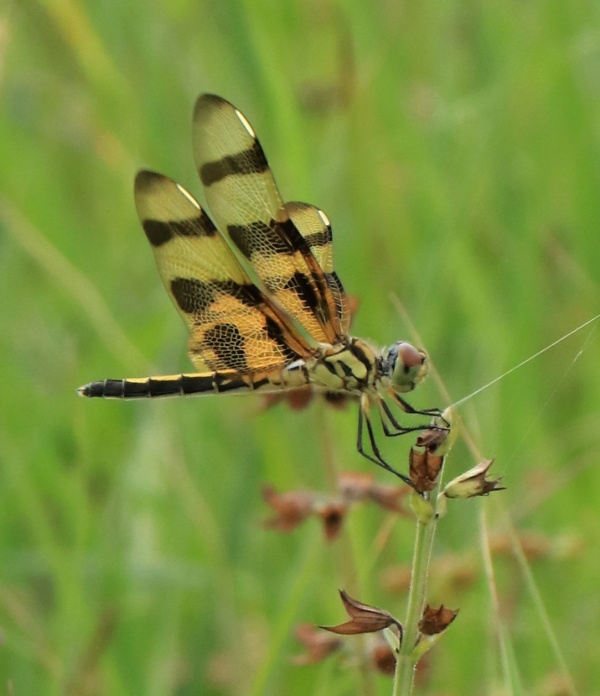 While the dragonflies flitted and perched, a pretty snail paused on a convenient branch. Whatever its identity, it provides a fine model for moving through nature: slow and steady is the way to go. 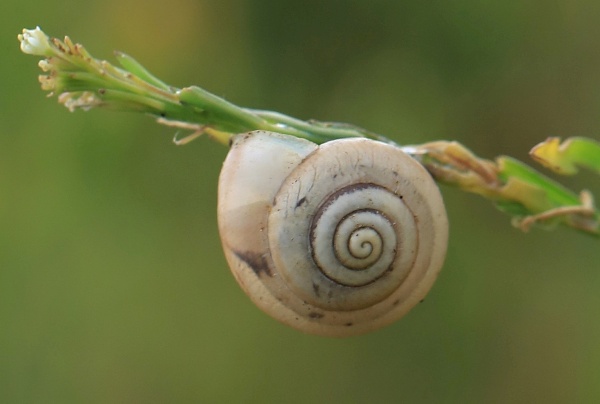 And so the seasons went rolling on into summer, as one rambles into higher and higher grass. 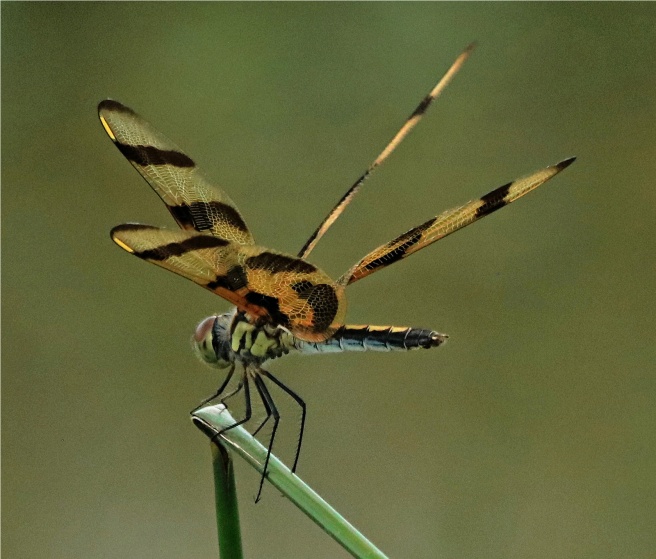 A young friend once described dragonflies as being “all buzz and all wings.” It’s an apt description, although “jewel of the skies” seems equally appropriate.

It’s always a treat to find one at rest, showing off those jewel-like qualities. This one, which I take to be a pennant of some kind — perhaps a Halloween Pennant (Celithemis eponina) — was kind enough to remain at rest for several minutes. From my vantage point at the side of a county road, I was able to photograph it with a background of grasses on the other side of the ditch that was attracting so many of its kind.

Then, I decided to change position. Turning ninety degrees to my right, I posed the dragonfly against the gray and not necessarily appealing ditch water; the striations in the background are reflections of the reeds on the other side of the ditch.

It’s the same dragonfly and the same perch, shown only minutes apart, but the feel of the photo has changed. As in photography, so in life: what’s offered as ‘background’ — of a person or of an issue — can make quite a difference in our perception. 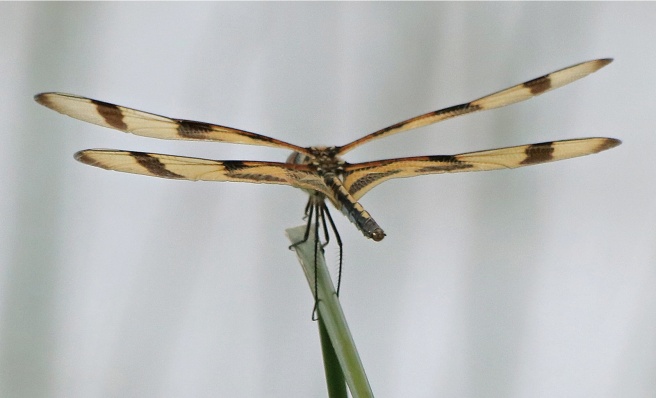 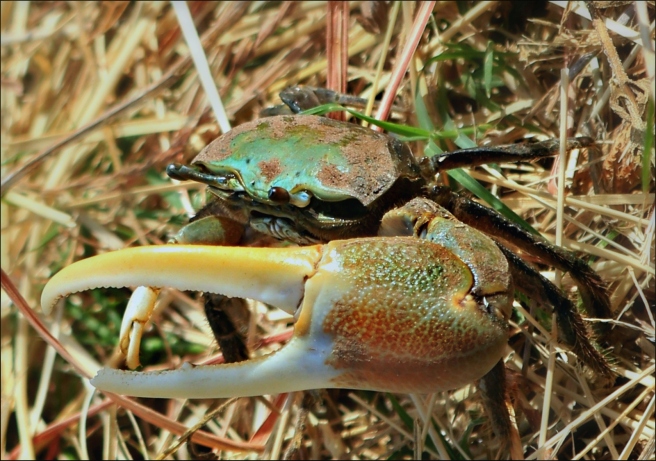 A broken pincer could make for a crabby crab

I suspect we’ve all experienced periods of Lucy Van Pelt style crabbiness over the past months, but this creature is ‘crabby’ all the time. It is, after all, a crab: a familiar sight in my part of the world.
Since I usually encounter crabs in the water, finding this one scuttling along atop a grassy levee intrigued me.  After cutting an erratic path through the grasses, it made a sudden turn, scooted down the levee’s side, and disappeared into a hole several feet above the water. Minutes passed, but the crab didn’t reappear, so I decided it had reached its destination, and went on my way.

If the crab had been our tasty blue swimming crab (Callinectes sapidus), I might have looked for its friends and turned them into supper. But the crabs I’ve known tend to stay in or very near the water, and a little research led me to suspect I’d met my first blue land crab (Cardisoma guanhumi) in that grass.
Usually found farther south in Texas, the blue land crab does range all along the Gulf coast into Florida, and this one had all the marks of C. guanhumi: a blue-green carapace and orange-to-brown legs, a single over-sized claw, its relatively large size and, of course, the fact that it was cruising around on land before it retreated into that hole.

A terrestrial species, the crab’s generally found near the shores of estuaries, creeks, and river banks. Burrowing into dense shrubbery, mud, or coastal sand hills, the crab prefers a burrow above the tide line and as much as six feet beneath the ground’s surface. Even when foraging, it doesn’t stray far from home, but uses light and sound to find the leaves, grasses, insects, and carrion it prefers. After foraging, it carries its food in its claws back to its burrow, eats until satisfied, and saves the leftovers for later.

The crab leads a relatively hidden and solitary life, but despite its solitary nature, on this day it seemed to welcome — or at least tolerate — an unexpected visitor. When a Blue Corporal dragonfly (Ladona deplanta) stopped by for an extended visit, they seemed perfectly at ease with one another, and not at all crabby or blue. 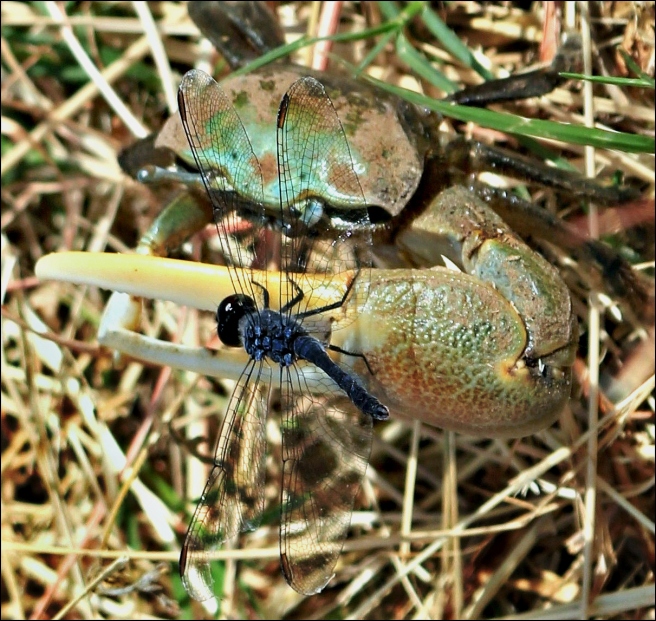 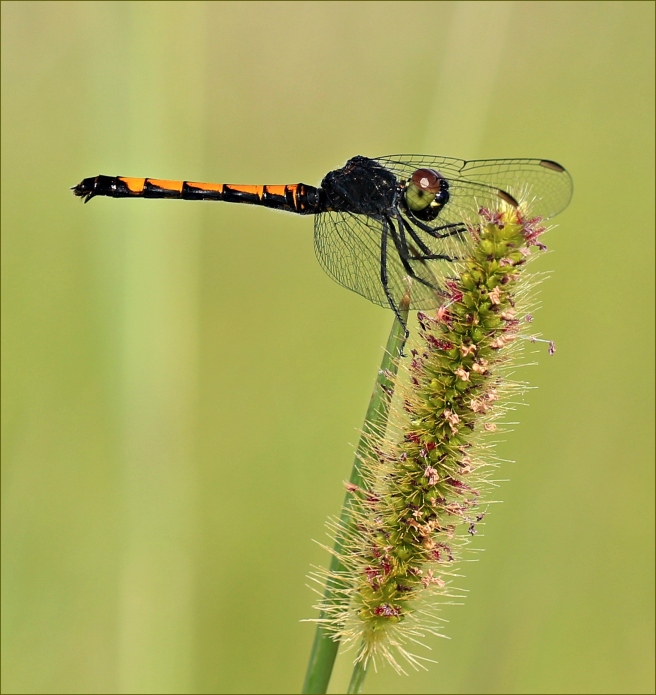 The Seaside Dragonlet (Erythrodiplax berenice) spends most of its time perched atop salt marsh plants; here, one rests on a stem of marsh bristlegrass (Setaria parviflora).

Perhaps ‘saltmarsh dragonlet’ would be a better name, since they’re often the only dragonfly in the marshes. Other dragonflies appear in coastal habitats, hunting insects over dunes and wetlands, but no other species is as tied to the coast as the dragonlet; they rarely appear inland, and are considered to be our only marine dragonfly.

The primary reason is their adaptation to salt. Like all dragonfly larvae, seaside dragonlet nymphs are aquatic, but their ability to regulate the concentration of salt within their bodies allows them to thrive in saltwater; researchers have found them tolerating water as much as three times the salinity of the ocean. In salt marshes, the seaside dragonlet often is the only medium-sized dragonfly — about an inch and a half long — that’s encountered.

Salt marshes are insect-rich, so dragonlets can afford to be a little lazy. They do less flying and more waiting than many species: launching themselves out to capture passing prey before returning to their perch.

Adult males are deep blue or black, with clear or nearly-clear wings; females show varying amounts of yellow atop the abdomen, and elaborate patterns of black-and-yellow striping on the sides of the thorax. As accomodating as they are attractive, they make fine subjects for a photographer. 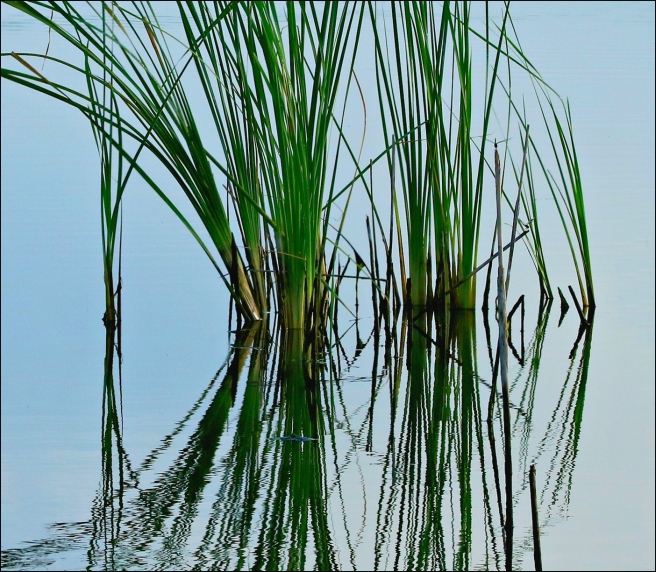 Pleased by the vaguely octagonal framing these aquatic plants had provided for themselves — a framing emphasized by some creative cropping — I paused to look more closely at the image.

As so often happens, I’d missed a few things when taking the photo: especially two dragonflies perched on the plants, and a very small, very young alligator cruising through the reflected reeds.

Given to pareidolia — the tendency to recognize familiar images in unfamiliar places, like a man in the moon or a dragon in the clouds — it wasn’t long before I noticed an angelfish cruising through the air, well above more ordinary fish still forced to live in the water.

Somewhere, an aquarium may be missing a resident.

Comments always are welcome.
(If you can’t see the allligator, try enlarging the image.)