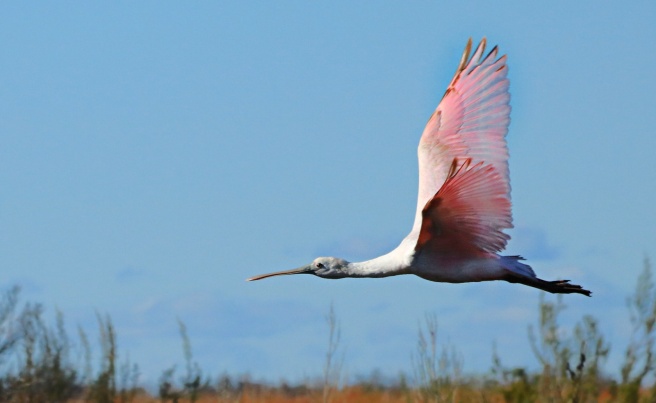 After interminable rainless weeks, the freshwater ponds at the Brazoria Wildlife Refuge became little more than mudholes. Maintenance took place in the form of mowing and cutting, but the always-enjoyable birds disappeared. On my last visit before Thanksgiving, I saw only two Great White Egrets and a pair of Pied-billed Grebes, and they were near the edge of a brackish canal.

After substantial holiday rains, the ponds hadn’t filled, but they became float-and-wade-worthy, and some of the usual residents had returned. I was especially pleased to catch the flight of the Roseate Spoonbill shown above. When I searched out its landing spot, I found more juvenile Spoonbills hob-nobbing with some White Ibis. It’s worth enlarging the photo to see their bright eyes.

At the edge of the Crosstrails Pond, smaller wading birds had collected to feed. I’ve tentatively identified these beauties, but any confirmation or correction is welcome. In the case of the Willet, the dramatic black-and-white wing patterns of the bird in flight seemed unmistakable. 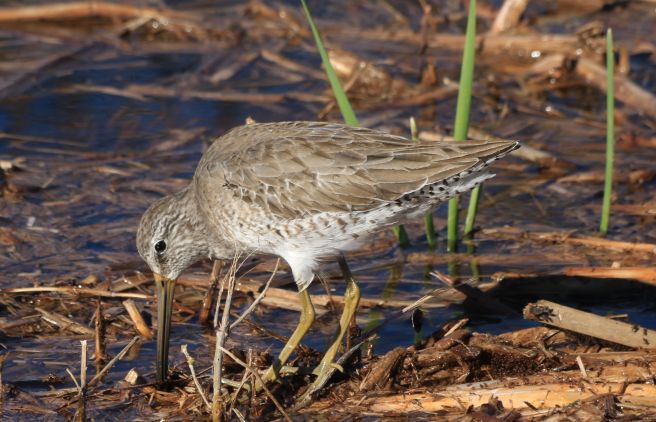 It’s always a pleasure to see the purple and green iridescence of the White-faced Ibis. During the breeding season, this species has pinkish-red to burgundy facial skin, with a striking rim of white feathers surrounding and extending behind the eye. Outside of breeding season, it retains its red eye color and a pinkish tinge to its facial skin, as it has here. 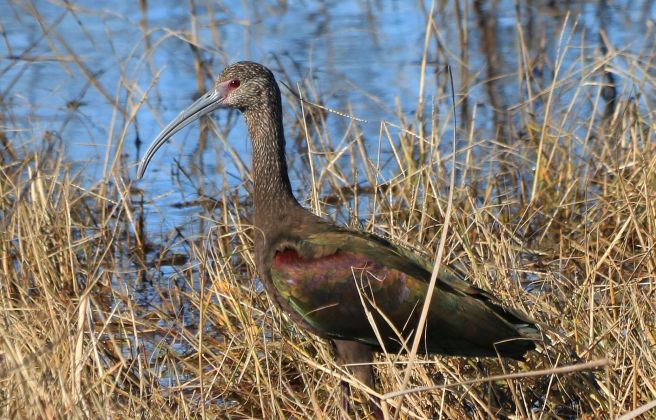 Late in the afternoon, I found an assortment of birds feeding at a culvert; the strongly flowing water clearly contained delectable tidbits. Great Egrets, Great Blue Herons, Boat-tailed Grackels, Roseate Spoonbills, and White Ibis had gathered, but the stars of the show were a pair of Snowy Egrets. Egrets sometimes extend their wings over open water as they hunt, creating shade to increase visibility. Here, a pair were taking advantage of the afternoon shadows; against the darkness, the delicacy of their wind-blown aigrettes, or breeding plumes, was highlighted.

Snowy Egrets neared extinction by the early 1900s because of a brisk trade in their plumes, considered desirable additions to women’s fashions. With the prohibition of the plume trade in 1913, the Snowy Egret managed to recover its population in most regions; today, loss of habitat is the birds’ greatest threat. 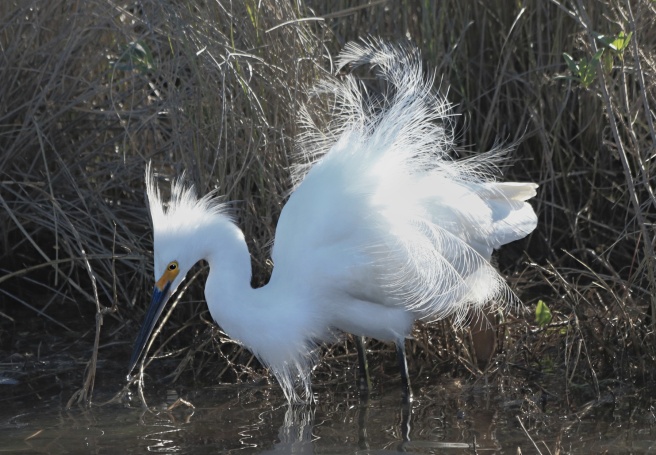 Human calendars aside, the birds’ plumes serve as a reminder that courtship and nesting aren’t so very far away. While we focus on winter and its holidays, the birds are preparing for spring, and for the new families that will be created.

While frost, snow, and colder temperatures make their way across Canada and into the United States, those of us who live on the Texas coast continue to enjoy our own autumn-into-winter transition.

On December 4, I spent a few hours exploring the Brazoria Wildlife Refuge, where a remarkable variety of flowers continued to bloom and increasing numbers of birds were appearing. The camphor daisy shown above, though in decline, still threaded through the mud flats and ditches, and one of our tiny asters (perhaps properly identified, or perhaps not) still was being visited by butterflies and other insects.

The lotuses are gone now, but an assortment of aquatic plants remain, including mosquito fern, duckweed, and this pretty water lettuce. Its soft, slightly fuzzy leaves suggest those of common mullein.

Away from the ponds, wading birds scattered across the sloughs and flats. I crept as close to these spoonbills as I could, shooting from behind a thick screen of reeds to keep them from taking flight. It appears this is a group of juveniles; youngsters are a paler pink than the adults, and their heads are fully feathered. 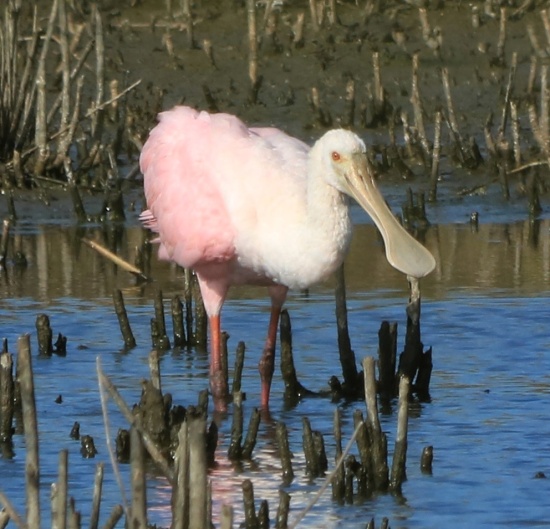 Lavender bespeaks autumn on our coast as much as red or gold. Here, tiny flowers of Texas vervain offer the smallest butterfly in North American a sip of nectar. Given the Pygmy Blue’s preference for cruising close to the ground, I was happy enough for this upside down view.

Our version of the scarlet pimpernel generally is orange, although blue and sometimes red flowers will appear. Low-growing and only a half-inch or so across, it’s delightfully detailed for such a small flower. 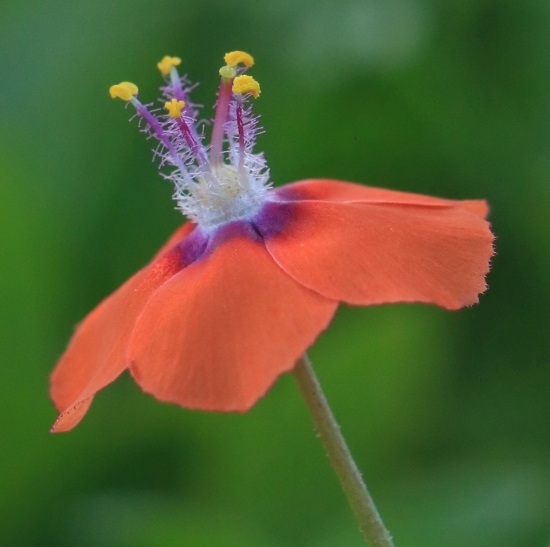 I rarely see the Ailanthus webworm moth, but when I do, I think of drapery and upholstery fabrics popular in the 1940s and 1950s.

Past the prairie and back at the slough, I found these ibises and egrets sharing a bank that offered protection from the wind.

They didn’t seem at all disturbed by the numerous alligators sunning themselves on the same banks.

Bright yellow cowpeas were everywhere, bringing a bit of visual warmth to the landscape.  I’d never before noticed the resemblance of their buds to those of the bluebonnet, but this time it was impossible to miss: a reminder that both are classified within the pea family, or Fabaceae. 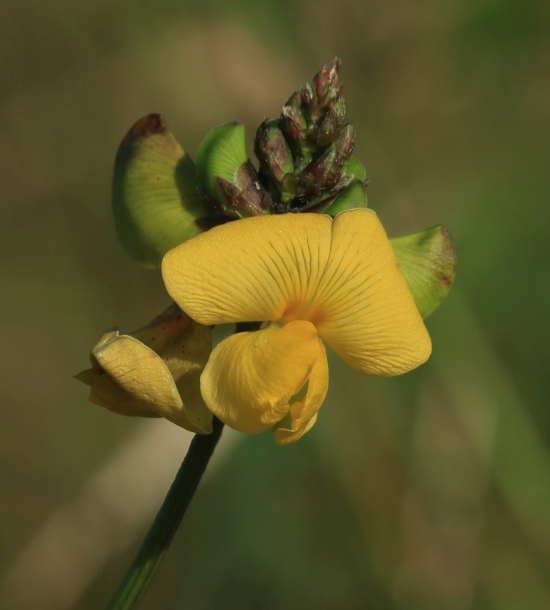 Today, a frontal passage with colder temperatures, rain, and wind has passed through, but soon enough the winds will switch to the south, and our typical December cycle will begin again.

According to various dictionaries, both the word ‘boon’ and the phrase ‘boon companion’ are tending toward obsolescence.  Nevertheless, ‘boon companion’ is exactly the phrase that came to mind when I encountered this assortment of avian pairs on Sunday afernoon. They certainly seemed to fit the definition of ‘boon companion’ from the 1560s:  “a convivial friend or close intimate, someone with whom one enjoys spending time or sharing activities.”

While it makes sense that members of the same species would enjoy hanging out together, cross-species companionship isn’t unknown. Many waterbirds engage in what’s known as commensal feeding, practices that benefit both members of the pair:

Simple proximity doesn’t always guarantee that a pair of birds are feeding commensally, but after watching this ibis and egret for a half-hour, I became certain they were sharing a meal.

On the other hand, most of the cormorants seemed ready for after-dinner naps. When I stopped to admire this pair, they deigned to look at me once before re-tucking their heads into their feathery pillows: perhaps to dream of fish in the afternoon warmth.

Comments always are welcome.
Click to enlarge any image for greater detail.

According to the Cornell Lab of Ornithology, white ibises tend to feed in large groups, seeking out shallow wetlands or flooded fields in which to forage. Given the right water depth, or soil that’s sufficiently wet, they’re perfectly content to dine even at urban parks or on lawns, probing the ground for the  grubs, grasshoppers, and crawfish that make up a large part of their diet.

Still, I hardly expected to find one in my parking lot. When I rounded a corner and discovered this fine fellow enjoying an afternoon snack, I happened to have my camera in the car with me, so I stopped, backed up, rolled down the window, and casually took a few photos.

Only later did I discover that the background, a combination of black metal fencing and green grass, made my visitor look like a prisoner. He wasn’t guilty of a crime, and as far as I know never was apprehended or charged, but he still ended up looking like a yardbird.